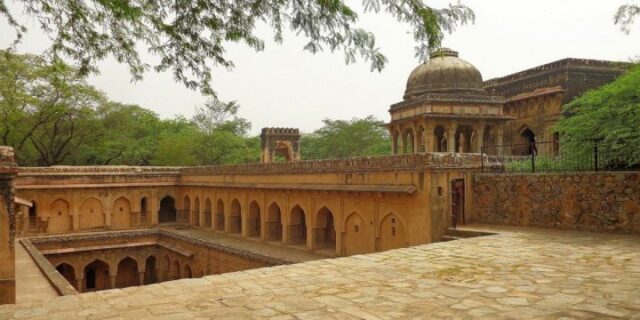 A woman at the head of state is an atypical phenomenon even for our progressive times. The election of representatives of the “weaker sex” to important government posts, up to the president or prime minister, causes great excitement in society, and the successful candidates themselves often face fierce criticism of traditionalists and supporters of “patriarchy”. If in the current era things are ambiguous, what can we say about the older times.

Nevertheless, women have left a significant mark in the history of mankind, including in the role of rulers. Cleopatra, Catherine the Great, Maria Theresia, Victoria – they all influenced the political and cultural life of their time. The listed queens and empresses are known to everyone – but the past keeps the names of less famous women who, by the will of fate, ended up at the head of the state. Often their lives turned into a continuous round dance of intrigues, behind-the-scenes games and betrayals. The same can be said about the fate of Razia, who became the Sultan of Delhi in the middle of the XIII century.

Delhi Sultanate – First Islamic Power in India
The territory of modern India and Pakistan became the arena of confrontation between Muslims and Hindus in the early Middle Ages – Arab conquerors in the VIII century appeared in Sindh and, after a series of battles and sieges, annexed it to the Caliphate. Northern India remained in relative security until the 10th century – until the Turkic dynasty of Ghaznavids settled in southern Afghanistan, creating a large state in several decades and subjugating several Rajput principalities.

Already in the middle of the 12th century, the Ghaznavids were replaced by the Ghurids – a dynasty of Tajik origin, existed on the political map of that time and even less, but it had more influence on the history of India than its predecessors. By the second half of the century, they were able to unite under their control almost all the lands belonging to the Ghaznavids, and in the 90s, the Sultan’s younger brother, Muazzudin Muhammad Guri, met with the combined forces of several Indian principalities in the north of the subcontinent. 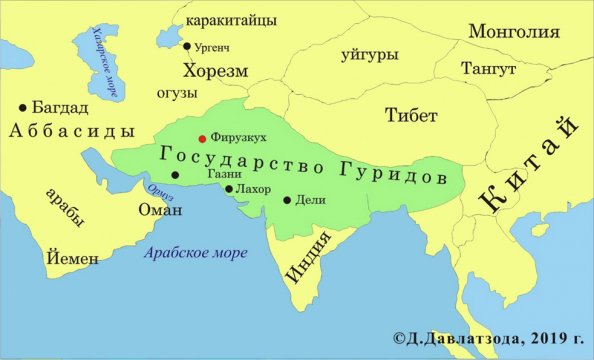 The Gurid Sultanate is at the peak of its power. (asiaplustj.info) The

Muslims broke the resistance of the local princes and conquered vast lands: all of northern India from Sindh in the west to the mouth of the Ganges in the east came under the control of the Ghaznavids. The viceroy in the Indian lands was one of the most talented military leaders who participated in the conquest – Qutb ad-Din Aybak, a Turkmen by origin and a ghoul (that is, a slave) of Muhammad Guri. He managed to create a solid control system in the subordinate lands, the basis of which was the Muslim aliens who occupied the main government posts.

In 1206, after the death of Muhammad Guri, the Gurid empire collapsed, and Aybak became a sovereign ruler, sultan, in the Indian lands conquered with his direct participation. He moved the center of his lands from Lahore to Delhi – it was from this time that the history of the Delhi Sultanate, which became the dominant force in India, until the arrival of the “Great Mughals” in these territories can begin. 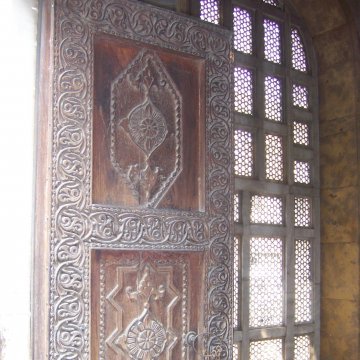 A carved wooden door to the Aibak mausoleum in Lahore, Pakistan. Source: wikipedia.org
Aibak’s short reign was accompanied, on the one hand, by the strengthening of the Muslim aristocracy in the Indian territories, and on the other, by the struggle of these very aristocrats among themselves. The Sultan was constantly involved in legal proceedings, acted as an arbiter in disputes and tried to maintain a balance in the still fragile administrative system of his territories. The Sultanate of Aybak was not yet a formidable force – it will become such under another “slave of the Sultan” who ascended the throne in 1211 – Iltutmish.

Palace coup: the beginning of the reign of Razia
The new sultan significantly expanded the territory of his state at the expense of the principalities of Central India. Under Iltutmish, Delhi achieved military superiority over its neighbors, but the internal situation remained extremely unstable – the governors often did not take into account the interests of the center and pursued an independent policy on the ground. The situation was aggravated by the problem of inheritance: the sultan had a very low opinion of his sons, so he relied on his daughter, Razia. In 1232, the sultan began to prepare a decree, according to which he planned to declare her as his heir – which, naturally, caused discontent among his sons and some governors. 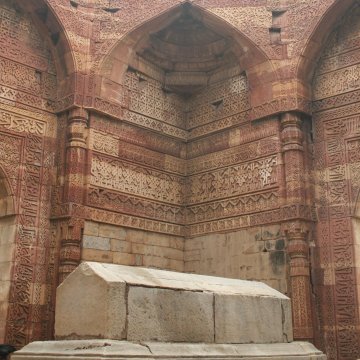 Tomb of Iltutmish in Delhi. Source: wikipedia.org
Wanting the best for his country, Iltutmish with this act laid a time bomb, which was to explode after his death. And so it happened – in 1236 the Sultan died, and clashes began at court. As a result of intrigues, one of the wives of the deceased sultan, Turkan, enthroned her son and half-brother Razia, Firuz, who did not differ in his ability to govern the state. In fact, it was Turkan who became the ruler of Delhi. At the same time, the external enemies of the Sultanate and the separatists did not fail to take advantage of the turmoil. The Punjab was attacked by the Turks, and one of the sons of Iltutmish, Mohammed, revolted. All these problems forced the legal ruler of the state, Firuz, to lead the troops.

The Sultan’s departure aggravated the contradictions between Razia and Turkana. Supporters of Iltutmish’s daughter raised their heads and began to act – the reason for the speech was rumors that Turkana was planning to eliminate his rival. The situation of Firuza’s mother was aggravated by the fact that Razia was popular among ordinary people of Delhi, which facilitated the “palace coup”. Turkana was arrested, and after a while, by order of the new sultan, Firuz himself was taken to Delhi. Mother and son soon found their death in prison.

Short reign and deposition
Having ascended the throne, Razia promised to return everything as it was under her father. “Daughter of Iltutmish” actively participated in state affairs, personally judged her subjects. On the coins of that time, the following title has been preserved: “Support of women, mistress of the era, Sultan Raziyya, daughter of Shams ad-Din Iltutmush.” Nevertheless, the first years of her reign were overshadowed by numerous uprisings, the reasons for which were both religious affairs and the discontent of representatives of the aristocracy that a woman took the throne in Delhi. 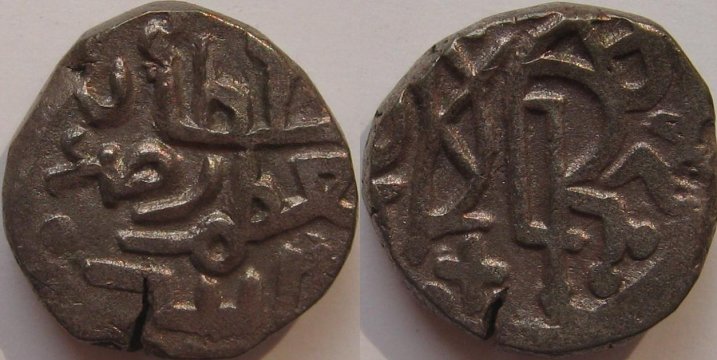 Coins minted during the reign of Razia. (ru.wikipedia.org)

Delhi elites, in addition, were unhappy with the free distribution of posts by the young queen. Especially the Turks were outraged by the rise of Jamal ad-Din Yakut, an Ethiopian by origin, who actually became the second person in the state. Yakuta and Razia were often seen together on walks, without his opinion, almost no important decision was made. The emirs were even more irritated by the new habit of the Sultan – to dress in a man’s dress and appear in front of those served with arms. Discontent was seething, and it was only necessary to wait for the chance.

The time came in April 1240. Then a protege of Razia, whom she elevated immediately after her accession to the throne, rose up – Emir Altuniyya. Some governors supported his speeches, and the sultan was forced to lead a campaign against the separatist herself. However, the internal enemies were just waiting for this – soon after the start of the campaign, Razia’s associates killed her favorite, the Ethiopian Yakut, and put herself in prison. At the same time, the initiator and inspirer of the uprising, Altuniyya, was cheated – instead of him another emir, Aitegin, was entrenched in Delhi, who elevated another son of Iltutmush, Bahram, to the throne. 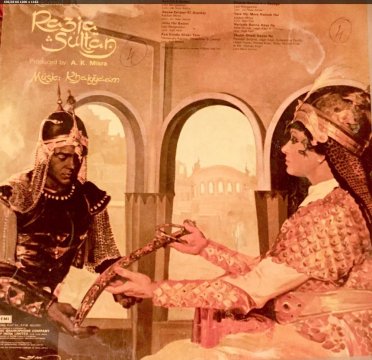 Second chance: union of former opponents
Despite the fact that Razia was imprisoned, the winners could not agree among themselves. Bahram was dissatisfied with his position of “ward”, Altuniyya – with the “betrayal” of his former allies. A few months after the deposition, in July 1240, the struggle for power entered a new stage. Aytegin, who married the sister of Sultan Bahram, began to behave too defiantly, ordering to grant him such honor as the real Sultan. Bahram was infuriated by this behavior of his senior colleague – in the end he decided to eliminate Aitegin for such blatant behavior.

At the same time Altuniyya decided to take a step worthy of a real daredevil. He freed Razia from prison and married her in order to claim the throne. The overthrown ruler of Delhi herself did not resist, but on the contrary, sent messengers to all parts of the country asking for support in the campaign against the capital of the country. There were many allies – Razia was supported by some emirs, dissatisfied with the rise of Aytegin, already killed by that time. The allies of the deposed queen met twice with troops loyal to Bahram. Both times Altuniyu and Razia suffered a setback – the spouses were finally defeated in October 1240. After that, the would-be rebels were captured and were executed. 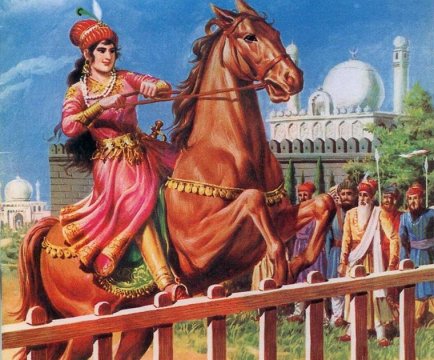 Razia on horseback and in arms in front of his subjects. Fantasy of a contemporary artist. (www.e7kky.com)

However, if there are no discrepancies regarding Altuniya, then the fate of Razia is controversial. There are legends according to which she was not captured by her brother, but, avoiding death, wandered around India, dragging out a poor existence. Hungry and exhausted, she asked for food from a Hindu plowman and fell asleep in his house. He, seeing richly embroidered clothes under the wanderer’s rags, killed Razia and sold them at a nearby market, which aroused the suspicions of other merchants. They took him to the judge, after which the plowman confessed to the murder of Razia. 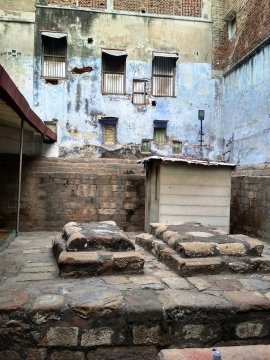 Tomb of Razia in Delhi. (www.tripadvisor.ru)
The only female sultan in the history of India, Razia has become a favorite heroine of fiction and folk legends. In modern India, as many as three films have been filmed dedicated to this historical character.

She went down in history as a just queen, who was well treated by ordinary people, the patroness of the arts and sciences. Razia herself wrote poetry – it’s amazing how she found time in the cycle of palace intrigues, endless wars and the intrigues of ill-wishers.

And although I did not see his face, but, like the
Pupils, I placed him in the heart of my eyes.
Not hearing your name, I loved him,
Not seeing your face, I love him like the light of my eyes.
Doesn’t mean the thrill of the sun’s rays,
That they tremble with fear of our angry gaze?

ouwa.org - December 12, 2020 0
Chinese manufacturer OPPO has announced the Reno5 Pro 5G smartphone with support for fifth-generation cellular networks. The frame of the novelty is an aluminum...