Archaeologists have discovered the perfectly preserved remains of two men who died during the eruption of Vesuvius, which destroyed the ancient Roman city of Pompeii about 2 thousand years ago.

According to scientists, one of these people was probably a slave, and the other was his master. Archaeologists suggest that the wealthy Roman was between 30 and 40 years old – he still has a woolen cape that was on him at the time of the eruption.

The second person is from 18 to 23 years old: judging by the fact that his vertebrae were compressed, he was engaged in hard physical labor and therefore was a slave.

Scary Pompeii find sheds new light on the scale of the disaster 2,000 years ago
“These two victims were most likely trying to hide, but they were boldly carried away by the pyroclastic flow. It happened at about nine in the morning,” says Massimo Osanna, director of the archaeological reserve in Pompeii. … 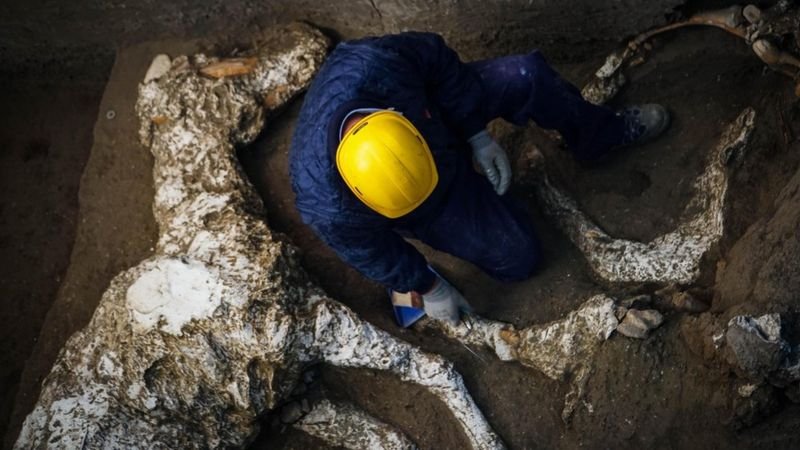 Just as in the case of other remains of the victims of the eruption of Vesuvius in Pompeii, the figures we see in the photographs are the result of the application of technology developed back in 1863 by the Italian archaeologist Giuseppe Fiorelli.

When, during the excavation of volcanic ash, voids are found in which the decayed remains of the dead are likely to be found, they are filled with gypsum. The result is an accurate cast of a man who lived two thousand years ago and suddenly found himself under a layer of pyroclastic flow.

Rich villa
The new find was made in an opulent Roman villa in the Civite Giuliana area. It was there that, two years ago, archaeologists discovered the remains of a horse in a harness – perhaps this crew was trained to rescue residents from an eruption.

The owner of the villa was probably a prominent military man or a high-ranking local official, scientists suggest.

At the time of the eruption, which occurred in 79 AD, about 13 thousand people lived in Pompeii.

Excavations in Pompeii continue, but due to the coronavirus pandemic, the archaeological site remains closed to visitors.