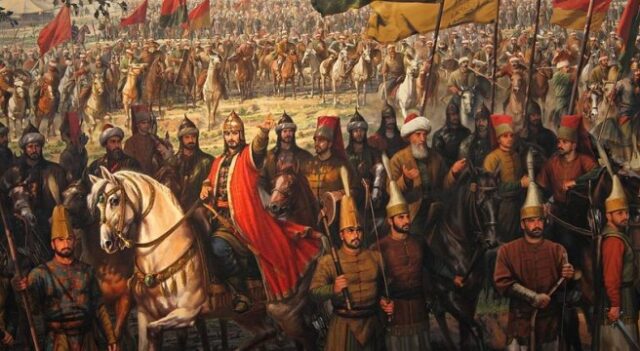 Serbia, Hungary, Egypt, Bulgaria – all these countries the Ottoman Empire was able to subjugate when it was at the zenith of power.

The Formation of the empire

Sultanate of Kony fell in the XIV century. It was inhabited by the Seljuks, the ancestors of the Ottomans. After the collapse of the state, the territories of Anatolia were divided by independent beys – Muslim leaders, who called the lands they inherited “beyliks”.

One of the numerous beyliks was ruled by Osman I. The lands of this leader were in the west of Anatolia. Osman I, who took the title of Sultan in 1299, expanded the territory of his “principality” over time. Thanks to the religious tolerance established in the beyliks, expressed in the granting of freedom of religion and the independence of confessional minorities from the central government, the new lands were not afraid to be part of the Ottoman beyliks. Slowly but surely the Ottomans approached the borders of the Byzantine Empire.

After Osman I passed away, the beyliks, which turned into the Ottoman Empire, began to spread their influence in the Balkan Peninsula and over the Eastern Mediterranean. In 1324, Sultan Orhan, son of Osman I, made the captured Bursa the new capital of the state. By the middle of the 14th century, the Turks already controlled many European territories. European Christians were unable to unite in time to drive Muslims out of their territories. And the Ottomans, on the other hand, used the civil strife of the authoritative Byzantine Empire to expand their spheres of influence and territory. For example, the Turks captured the vast majority of the lands of Thrace.

Battle of the Kosovo field

The circle of vassals subordinate to the Ottomans expanded when, after the Battle of Maritsa in 1371, the Turks captured a number of cities on the Aegean coast. At that time, the top of the Ottoman Empire had already thought out a plan to further expand its influence in Europe. Muslims often got involved in Christian internecine conflicts, thereby weakening Europe. Over time, the troops of the Ottoman Empire occupied the cities of their “allies”, who suffered during the conflicts. So the Ottomans subjugated new and new territories.

In 1381, the Turks came to the Serbian lands, which were then ruled by Lazar Khrebeljanovic. The Ottomans won the Battle of Dubravnitsa. But that was only the beginning of the Muslim invasion. In the summer of 1386, the Ottoman army led by Murad reached Plochnik, and two years later the Turks tried to invade Bileci, but they were stopped.

However, the ring around the Serbian principality continued to shrink. The situation was aggravated when the Ottomans acquired an ally in the form of Hungarian lands – as usual, Muslims took advantage of internecine wars and concluded diplomatic agreements with one of the warring parties. In the summer of 1389, Sultan Murad announced a large-scale campaign against Serbia. In addition to Muslims, soldiers from vassal states and mercenaries entered the army units of the Ottoman Empire. Thanks to the Macedonian vassals, Murad entered the Kosovo field. On June 15, 1389, a large-scale battle took place at this place. The Serbs, who received reinforcements from the Bosnians, moved troops to the field in response to the Ottoman aggression.

The number of Turkish troops, according to some sources, ranged from 27,000 to 40,000 people. Lazarus’s army numbered from 12,000 to 33,000 soldiers. The battle began with the shelling of the Serbian positions by Turkish archers and the attack of the heavy cavalry of the Slavs, which crashed into the Turkish positions with a wedge. Serbian soldiers managed to achieve some success in the center, somewhat pushing back the Turks. However, on the right flank, Bayezid I went over to a counterattack, pushing back the Serbs and hitting their infantry. Gradually, the defense of the Serbian infantry was broken, and they began to retreat. Vuk Brankovich, seeking to save the remnants of the troops, left the battlefield. Following him, the remnants of the detachments of Vlatko Vukovich and Prince Lazar left the battlefield. Lazarus himself was captured during the battle and was executed on the same day. The Serbian Orthodox Church canonized the last ruler of the independent principality.

The Sultan was killed at the very beginning of the battle. The Turkish army was led by his son Bayazid I.

Having won the victory, the army of the Ottoman Empire left the Kosovo field and moved east, as the new sultan Bayazid sought to strengthen his influence. Vuk Brankovic, who became the new ruler of Serbia, did not immediately submit to the Turks. On the Orthodox land of Vuk, almost all the nobility perished. The population and elites of Serbia understood that they would not last long against the monolithic Ottoman Empire.

Bulgaria – the new target of the Ottomans

After the Battle of Kosovo, the Ottoman Empire extended its influence to several more beyliks. In the 90s of the XIV century, Sultan Bayazid I continued to conquer the Balkan Peninsula. The Turks raided the south of Hungary, and later they decided to invade Bulgaria. Already in 1393, Bayazid subdued the capital of Bulgaria – the city of Tarnovo. And the country of the Slavs became a province of the Ottoman Empire.

After these events, Pope Boniface IX announced the beginning of a new crusade against the Muslims. In the fall of 1396, near Nikopol, the armies of the Ottoman Empire and the crusaders clashed, the troops of which included the French, British, Croats, Poles, Hungarians, and representatives of other peoples. At first, the Christians were able to put the Turkish infantry to flight, but later the knights were defeated by the Sipahs, the cavalry of the Ottoman Sultan. The French were defeated at the very beginning of the Ottoman counter-attack, and later the Turks dealt with the allies. This is how the Ottoman Empire consolidated its position on the Balkan Peninsula.

During the reign of Sultan Murad II, relations with Venice, to which Byzantium handed over Thessaloniki, worsened. Foreseeing the possibility of an anti-Ottoman alliance, Murad attacked Serbia in 1425, and Wallachia in 1426, putting an end to any hopes of Venice for help from these states. After the death of the Ottoman vassal, Serbian ruler Stefan Lazarevich, the Hungarians captured Belgrade, and the Ottomans – Golubech, as a result of which the Hungarian and Ottoman borders became closer. Taking Thessaloniki in 1430, Murad entered into an agreement with Venice. In 1431, Murad advanced with troops to oppose Hungary’s claims in Albania.

In the 40s of the 15th century, the king of Poland and Hungary, Vladislav, tried to weaken the influence of the Ottomans in the Balkans. The monarch wanted to return Serbia to his vassal Georgy Brankovic. Another crusade gathered – Poles, Serbs, Hungarians and some Albanians decided to fight the Muslims. The knights forced the Ottoman Empire to sign a peace treaty, according to which the Turks gave freedom to the Serbian lands. However, in the summer of 1444, Vladislav violated the truce. True, the Serbs refused to support the Polish-Hungarian king.

On November 10, a major battle took place near Varna. The Ottoman army, which outnumbered the army of the crusaders three times, destroyed almost all the knights in that battle. Then King Vladislav was killed. The remnants of the crusaders fled. The weakening of Christians in the Balkan Peninsula allowed the Ottoman Empire to take Constantinople in 1453 and regain control of Serbia by 1459.

After the Persian Shah Ismail I at the beginning of the 16th century captured Kurdistan, Armenia, and Iraq, which were formerly part of the Turkic state of Ak-Koyunlu, the Turkish Sultan Selim I retaliated by exterminating 40 thousand Shiites in Asia Minor in 1513 and marching against Iran.

On August 23, 1514, the Chaldyran battle took place. In the morning, the Turkish cavalry attacked confidently. Ismail responded with a heavy cavalry counterattack. In that battle, the Persian Shah personally fought the Ottomans. The Persian cavalry defeated the Turkish infantry. However, moving forward, the Persians were forced to flee – they were met by powerful Turkish artillery. She shot the heavy cavalry of Ismail I. The Turks also responded to the enemy’s offensive with a raid of the Janissaries. This decided the outcome of the battle.

The Turks refused to conclude the peace proposed by Ismail, occupied the Safavid capital of Tabriz, in which they could not resist, and annexed Western Armenia, Kurdistan and the northern part of Iraq to their possessions.

In the subsequent decades of the 16th century, the Turks more than once attacked the lands subject to the Persians. By the end of the century, Turkey had already received the overwhelming part of Azerbaijan, Eastern Armenia, Eastern Georgia, significant parts of Luristan and Kurdistan.

Hungary – the old rival of the Ottomans

In the 20s of the 16th century, Sultan Suleiman the Magnificent continued the work of his ancestors, capturing Serbian lands. After successful military operations against the Slavs, the invasions of Hungary and Austria followed.

In the summer of 1526, the army of the Ottoman Empire approached the borders of Hungary. The Turks successfully stormed one Hungarian fortress after another.

On August 29, the battle began near the town of Mohacs. King Lajos II had 25 thousand men and 80 guns under his command. The bulk of the troops were mercenaries from the Czech Republic, Croatia, as well as the Holy Roman Empire, Austria, Italy, Poland and the German principalities. Sultan Suleiman I had a force of at least 50 thousand people and 160 guns.

At the beginning of the battle, the cavalry of the knights confidently pressed the Muslim cavalry, forced to retreat. But the knights made the mistake of the previous enemies of the Ottomans – they began to pursue the retreating Turks, not noticing how they were approaching the artillery of the Ottoman Empire. Taking advantage of powerful technology and numerical superiority, the Turks drove the knights back to the Danube, defeating most of the Christian troops.

The victory at Mohacs opened the way for Sultan Suleiman I to the Hungarian capital Buda. Two weeks after the battle, the city capitulated to the Turkish army. In the place of the Hungarian lands conquered by the Ottomans, a new region was formed – Ottoman Hungary, which existed in 1526-1699.

Turkish Sultan Selim I in 1517 began the conquest of Egypt, which was then under the rule of the Mamluks – the Sultan’s guard made of captured or purchased slaves, which eventually became an independent force.

The Sultan’s army built a military camp on the borders of Egypt. In January 1517, the Turks entered the lands of Cairo without encountering any resistance. The Ottomans plundered the capital of one of the most ancient states. The Mamluks were in Upper Egypt at that time. They were forced to retreat there, but even there the Mamluks did not find rest – they were finally defeated by the Turks.

The local population of Egypt was under the oppression of the Turkish nobility. Also, the Egyptians lost any independent power, leaving the levers in the hands of the Pasha, subordinate to the Sultan of the Ottoman Empire.