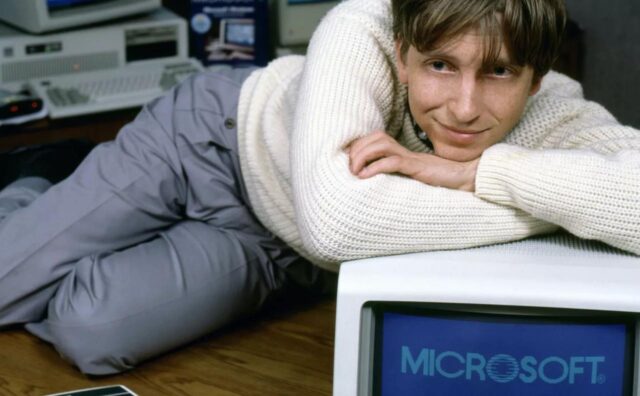 OUWA – Windows 1.0 to Windows 10 After 35 Years. It’s been 35 years since Microsoft first launched Windows to replace MS-DOS. Windows 1.0 was released, marking an important milestone in the computer revolution and the premise for other more modern versions of Windows in the future. Even though Windows 10 is much more genuine, advanced, and modern nowadays, there are many things that still inherit from 35 years ago. Let’s see the development journey of the Windows operating system offline. 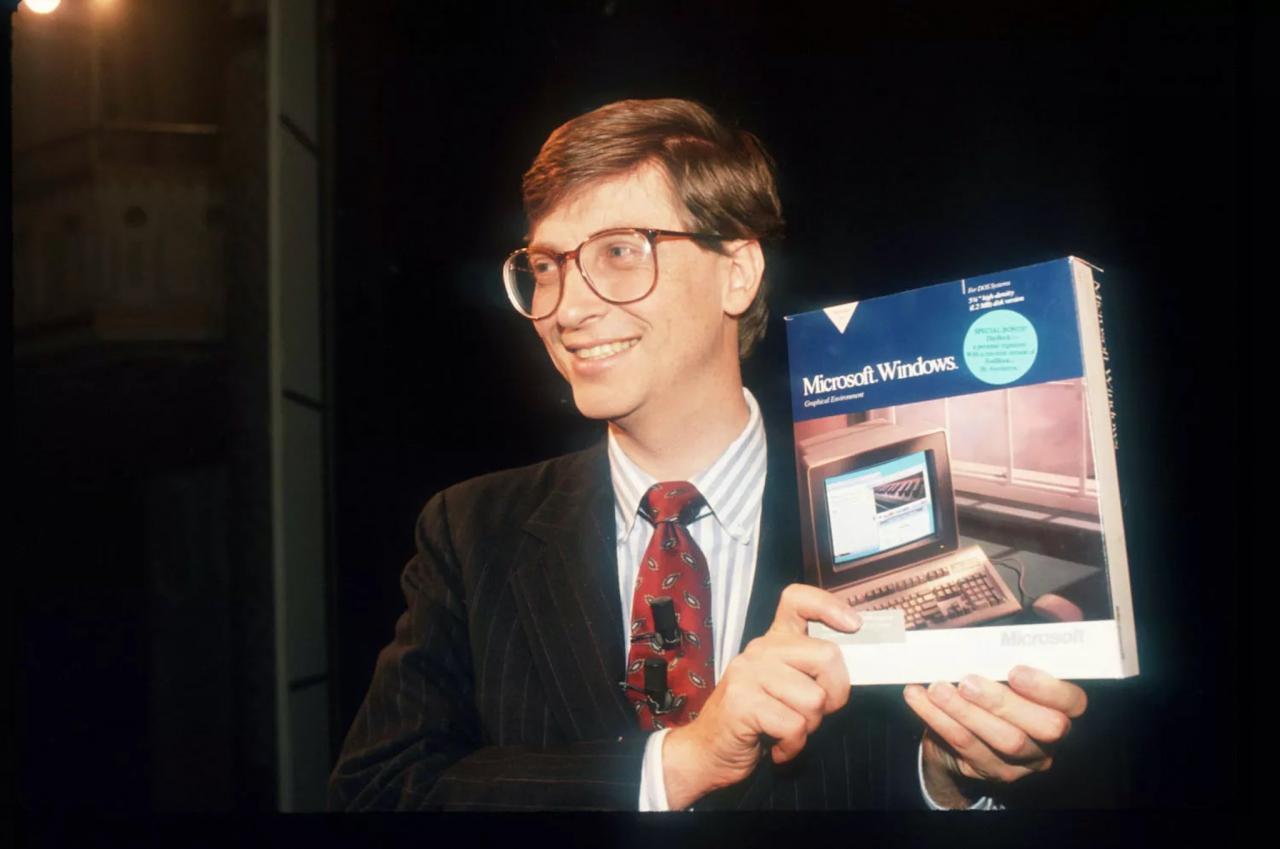 Windows 1.0 was the version that set the stage for the popularization of computer mice. In the days when computers were using MS-DOS, users could only interact with the operating system through inputting commands. This is generally a pretty “frustrating” experience. With Windows 1.0, manipulating the cursor will make using the computer more intuitive and efficient. At that time, Windows 1.0 and the first version of Macintosh completely changed the way users interact with computers. Many users at that time were not familiar with the mouse even complained that the operating system made typing keyboard commands less important (it is true that whatever goes against the habit is receiving negative feedback). Windows 1.0 was not well received at the moment, but it sparked the war between Microsoft,

Back in 1985, to use Windows 1.0, a computer required two floppy disks of memory, 256kb of memory, and a graphics card. That is the minimum requirement, but if you want to use many programs at the same time, the PC needs to have a hard drive and 512kb of memory. Today, we can do almost nothing with 256kb of memory. Although at the time, Apple had a lead in the creation of the GUI (graphical user interface), Microsoft created a low-cost operating system for IBM computers, from which a solid position. in this field. 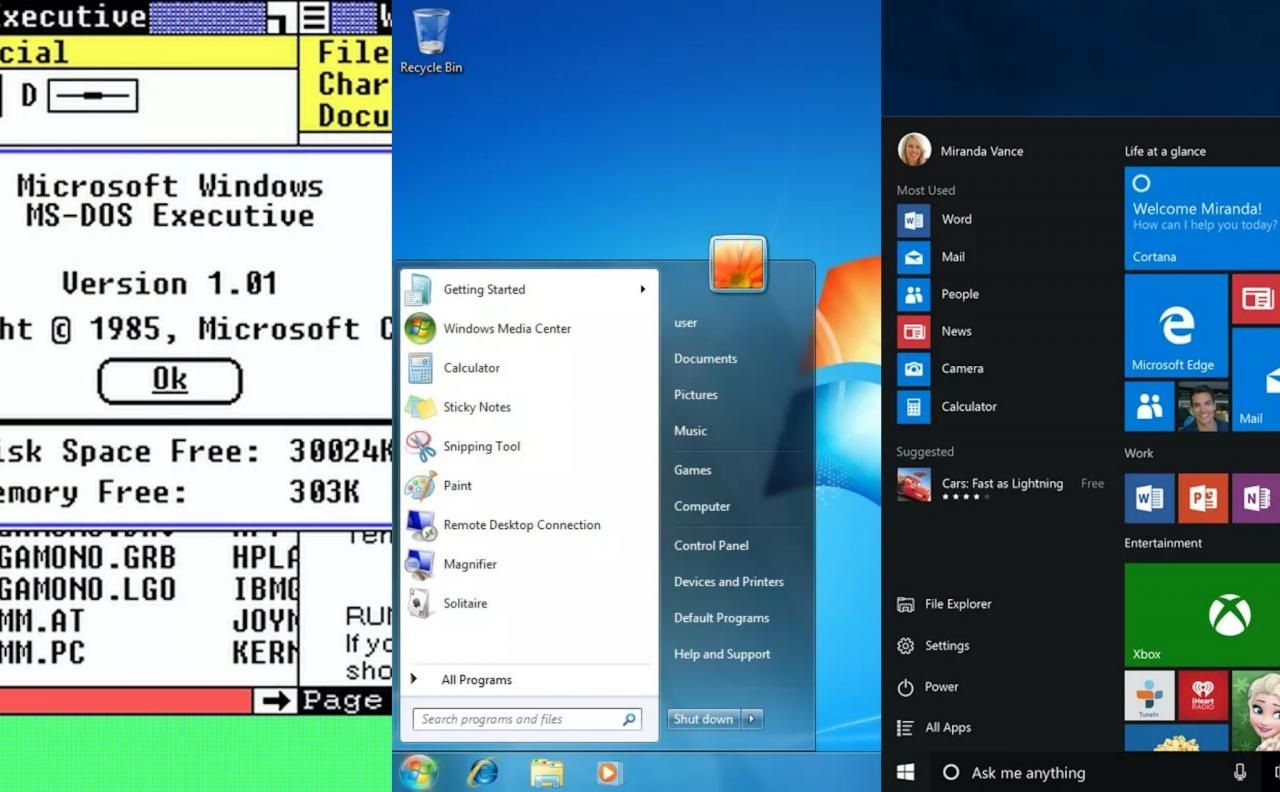 Windows 1.0 focused on core applications and software, which is a pretty important step. At that point, IBM had grown the hardware to a stable level, and everything about the hardware of a PC was all right. But thanks to Windows, Microsoft has made software development easier. They also ensure that Windows is relatively open, easy to tweak, and reconfigure. PC manufacturers started flocking to Windows and software companies began to support this operating system more, since Windows began to appear as important software as it is now. This is one of the great strengths that until now, Windows is still holding the advantage.

Windows 1.0 introduced the GUI, the so-called graphical user interface. It supports the mouse and has a number of important applications. Bill Gates was the head of Windows 1.0 development after working for many years on the Mac. It can be said in terms of GUI, Mac is the pioneer, but Windows has caught up in time, otherwise, it will not be today. Windows 1.0 was the first version of the operating system with 16bit graphics, running on the MS-DOS platform. 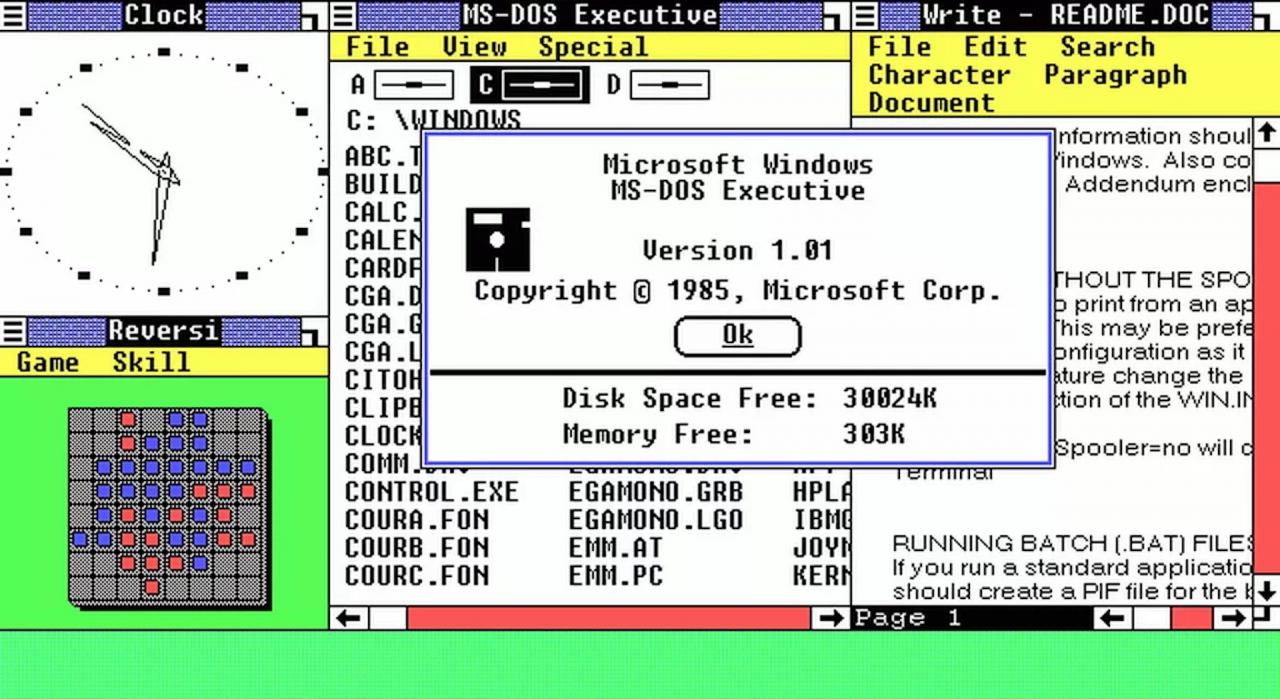 Windows 2.0 continues to inherit the 16-bit graphics of its predecessor. At this point, we also have our first versions of Word and Excel. This version allows multitasking of apps that are stacked on top of each other and have app icons on the screen to make it easier to use. Six months later, Windows 2.1 was released, which was the first version of Windows that required a hard drive to run. 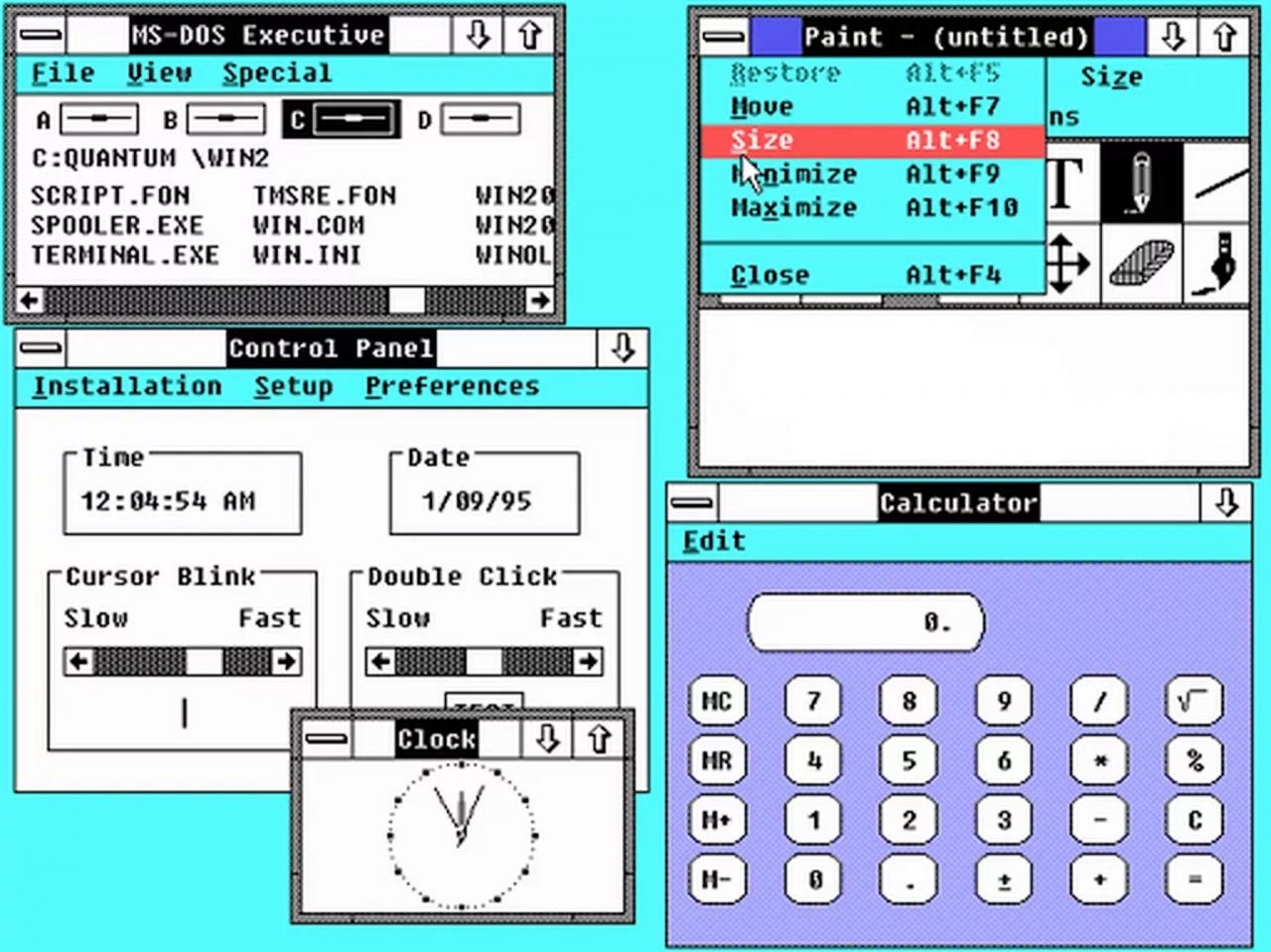 Windows 3.0 continued the legacy of the old graphical user graphics, on the MS-DOS platform. However, the design was nicer and clearer. They have integrated brand new Program and File Manager for managing files and applications. Additionally, the classic minesweeper has appeared in the Windows 3.1 update. 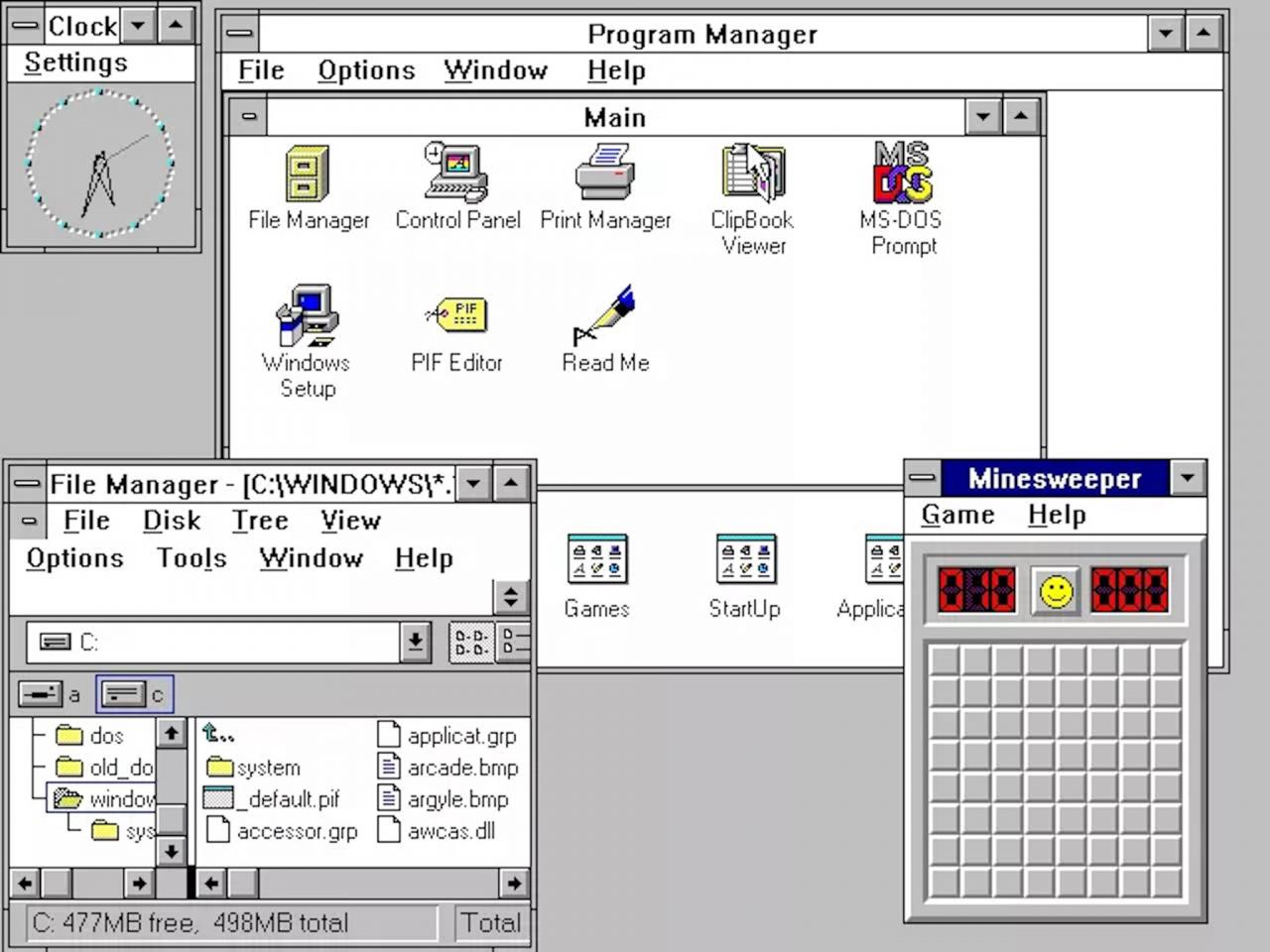 Windows NT 3.5 marks Microsoft’s push into the enterprise computing space with important security and file sharing features. This release also supports TCP / IP – the network communication protocol we all use to access the internet today. 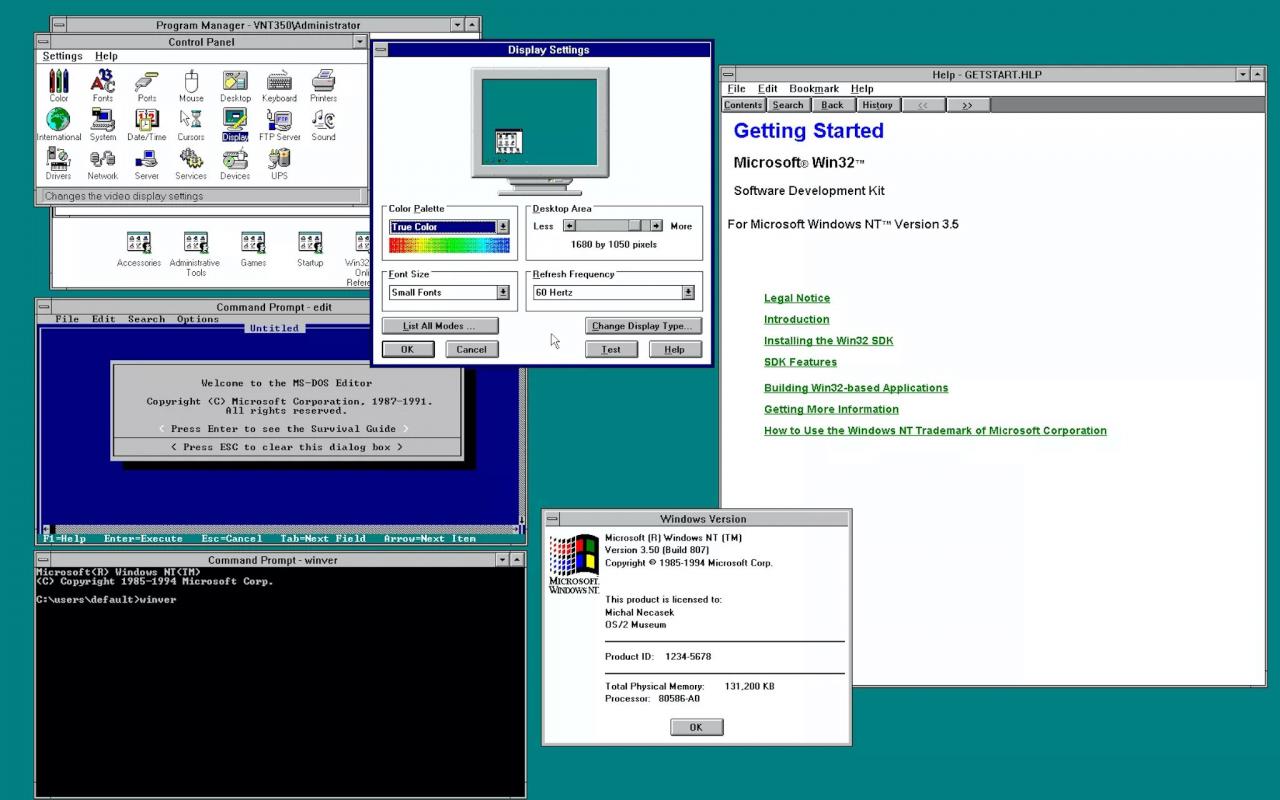 Windows 95 was the beginning of the “modern era” of Windows. This is considered the most important update in the history of Windows. Microsoft has moved on to 32-bit architecture, they also have a Start Menu and a bunch of other new applications, including Internet Explorer – which we happily call the browser to load other browsers. 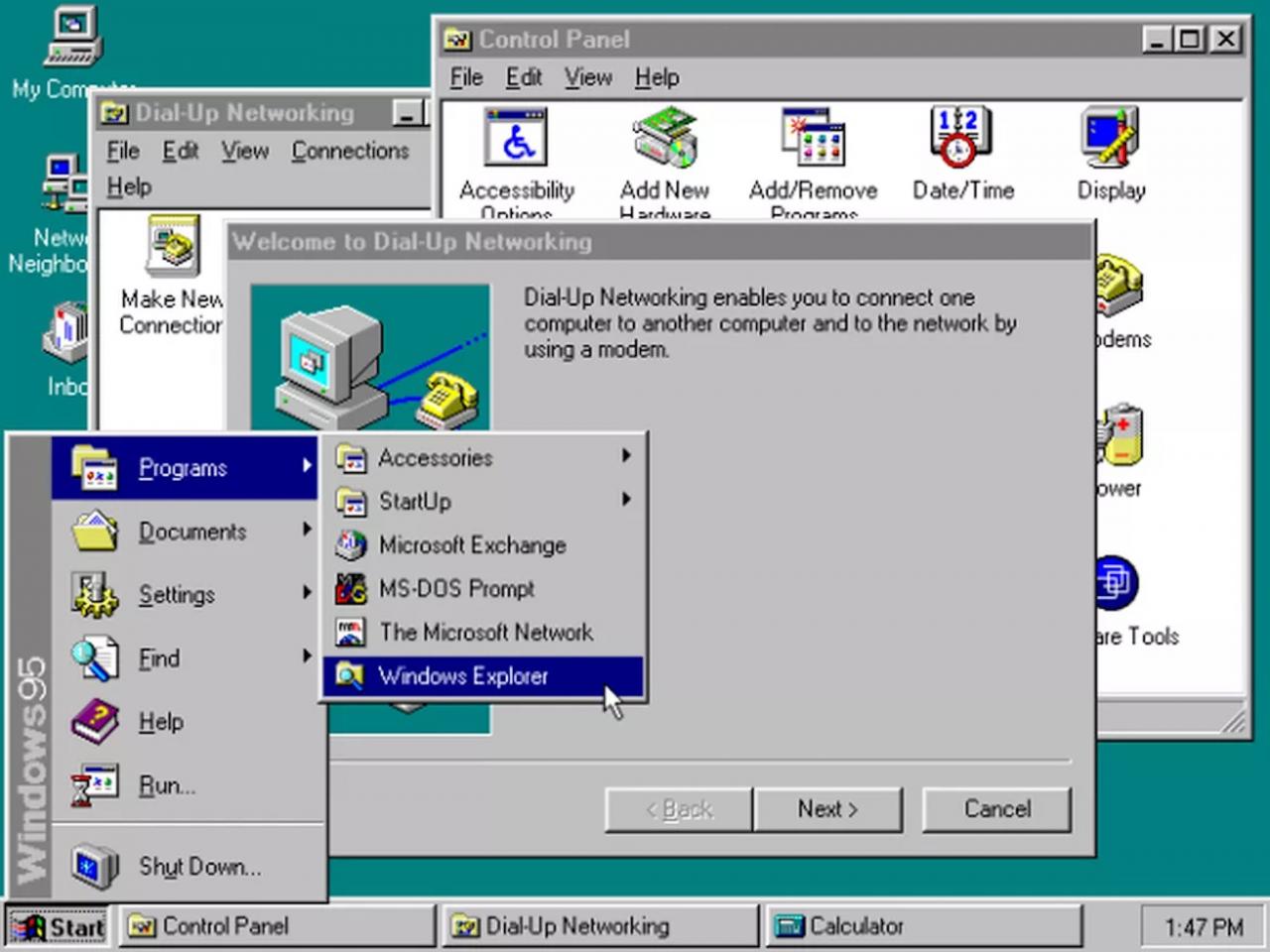 Continuing to evolve from the success of Windows 95, Windows 98 has improved hardware support and improved performance at the same time. In the context of the Internet starting to develop strongly, Microsoft has also released a series of things related to this issue such as Active Desktop, Outlook Express, Frontpage Express, Microsoft Chat, and NetMeeting. 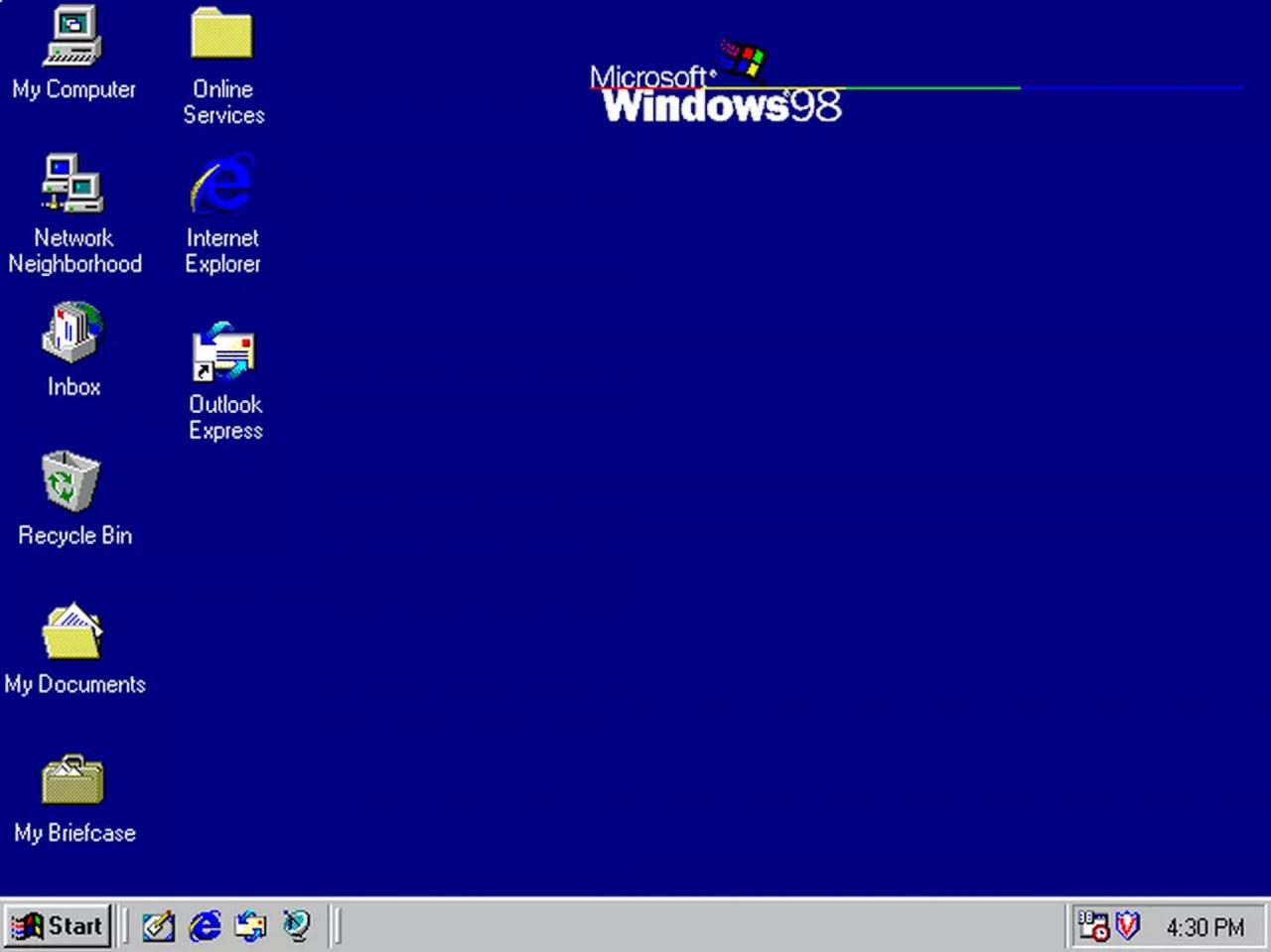 Windows started to categorize users into different segments, and Windows ME focused on multimedia and home users. However, this version is not stable and has too many bugs. However, some important applications such as Movie Maker, Media Player and IE new version have appeared in Windows ME. 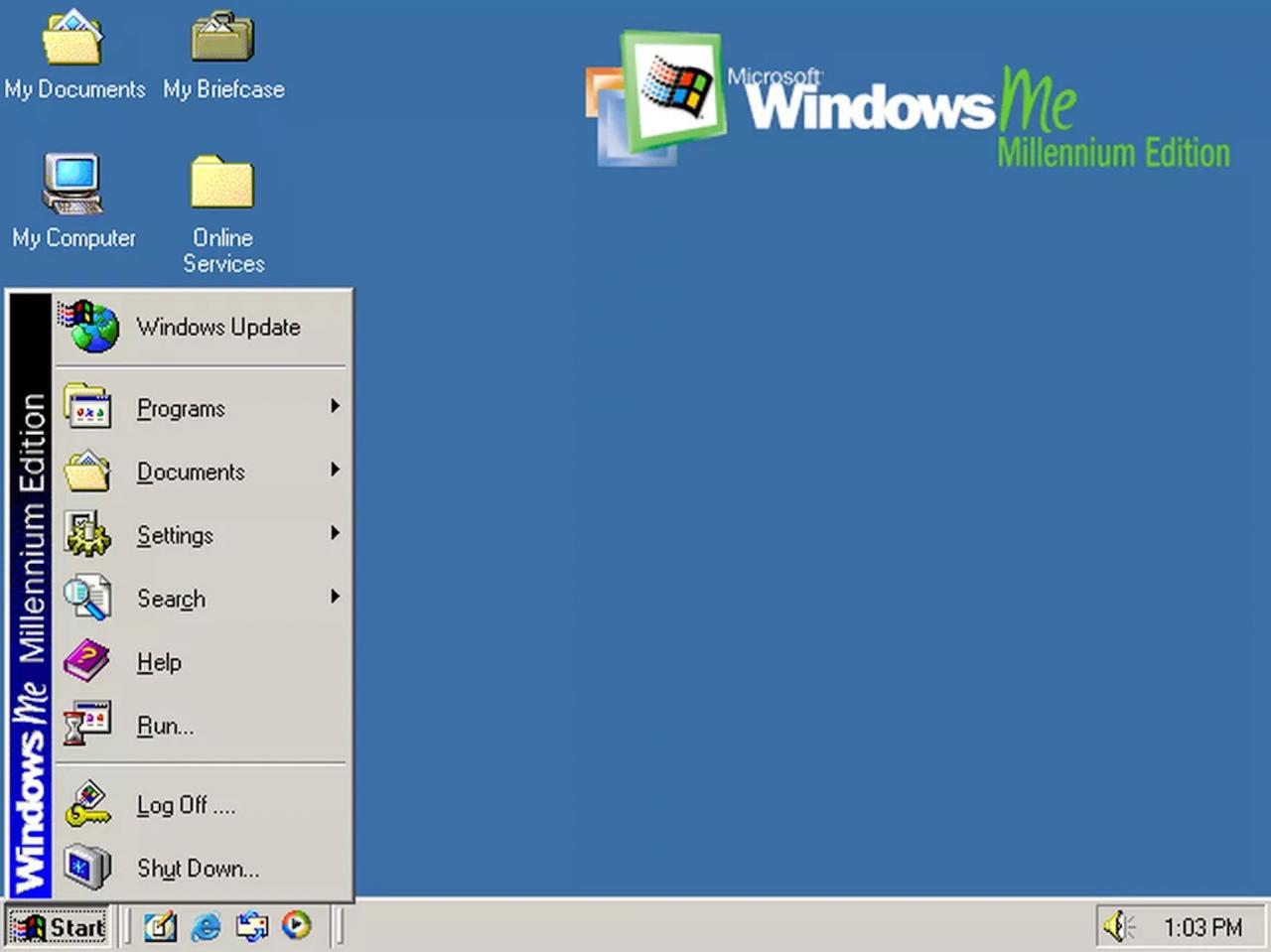 Developed on the basis of Windows NT, Windows 2000 is focused on business travelers and servers. This release addresses security, DLL cache, and peripheral management issues. 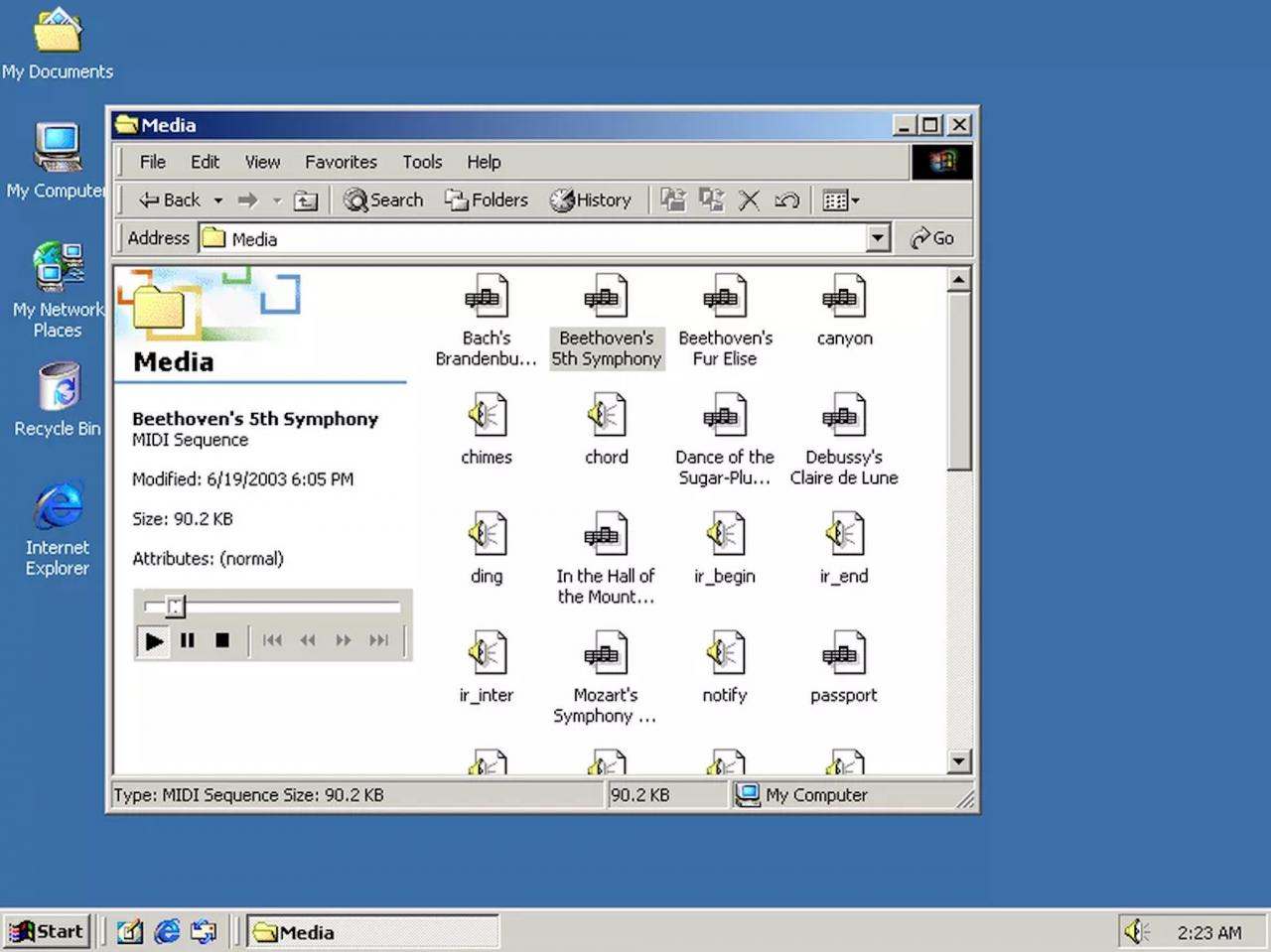 As a perfect combination of business needs and home use, Windows XP is considered one of the most famous and used Windows versions. Surely many Subtle brothers have also been very much attached to Windows XP. 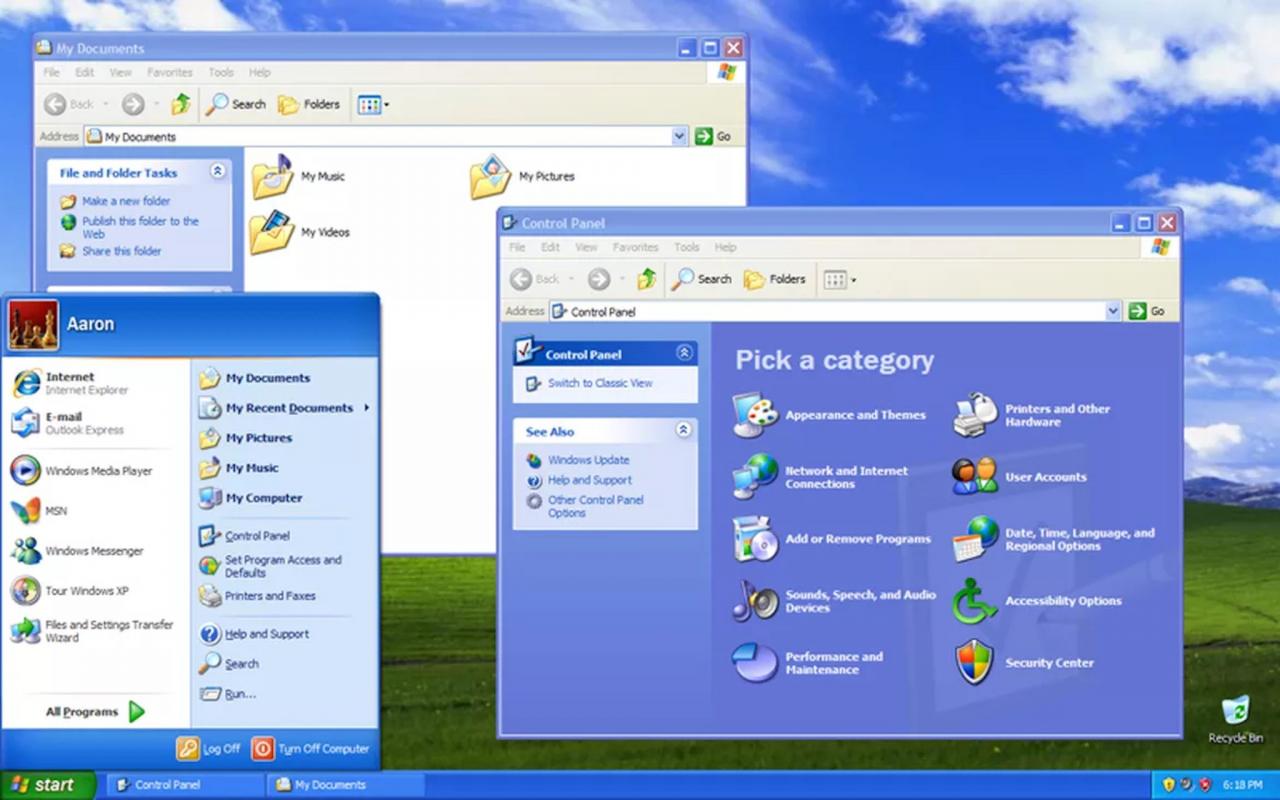 Although also considered a “spray bomb” as Windows ME, but Windows Vista has introduced Aero UI very nice and a bunch of other modern features. What makes Vista so unpopular is that it works just fine on new hardware, not optimized for older computers. Users frequently report that they encountered a lot of critical bugs on Windows Vista, turning it into a “dead OS” in the long run. 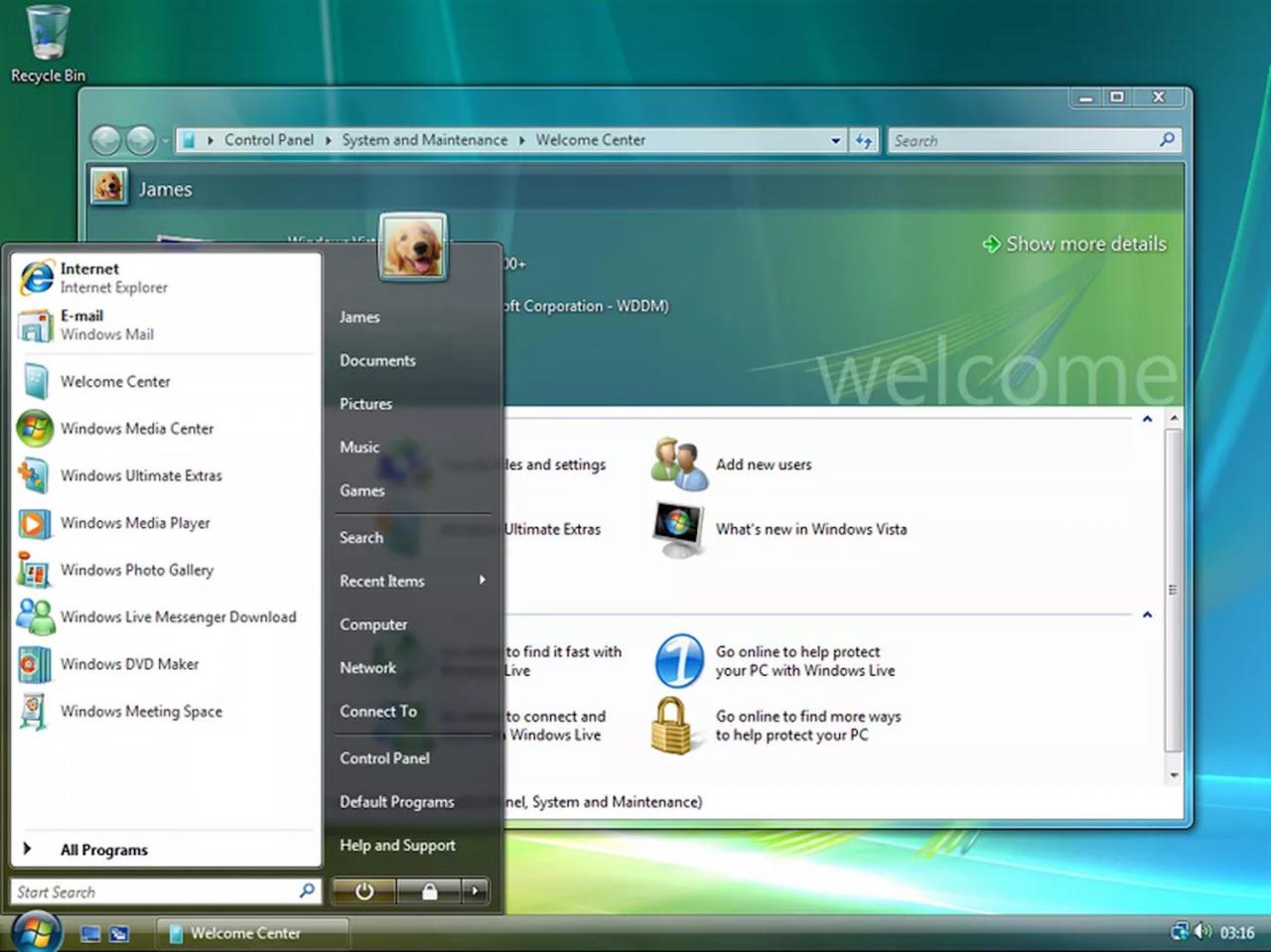 Windows 7 appeared two years later with the task of “cleaning up the mess that Vista created”. With the beautiful Aero interface, performance has been greatly improved. They have also tweaked and improved the user graphics, making it one of the most popular versions of Windows. 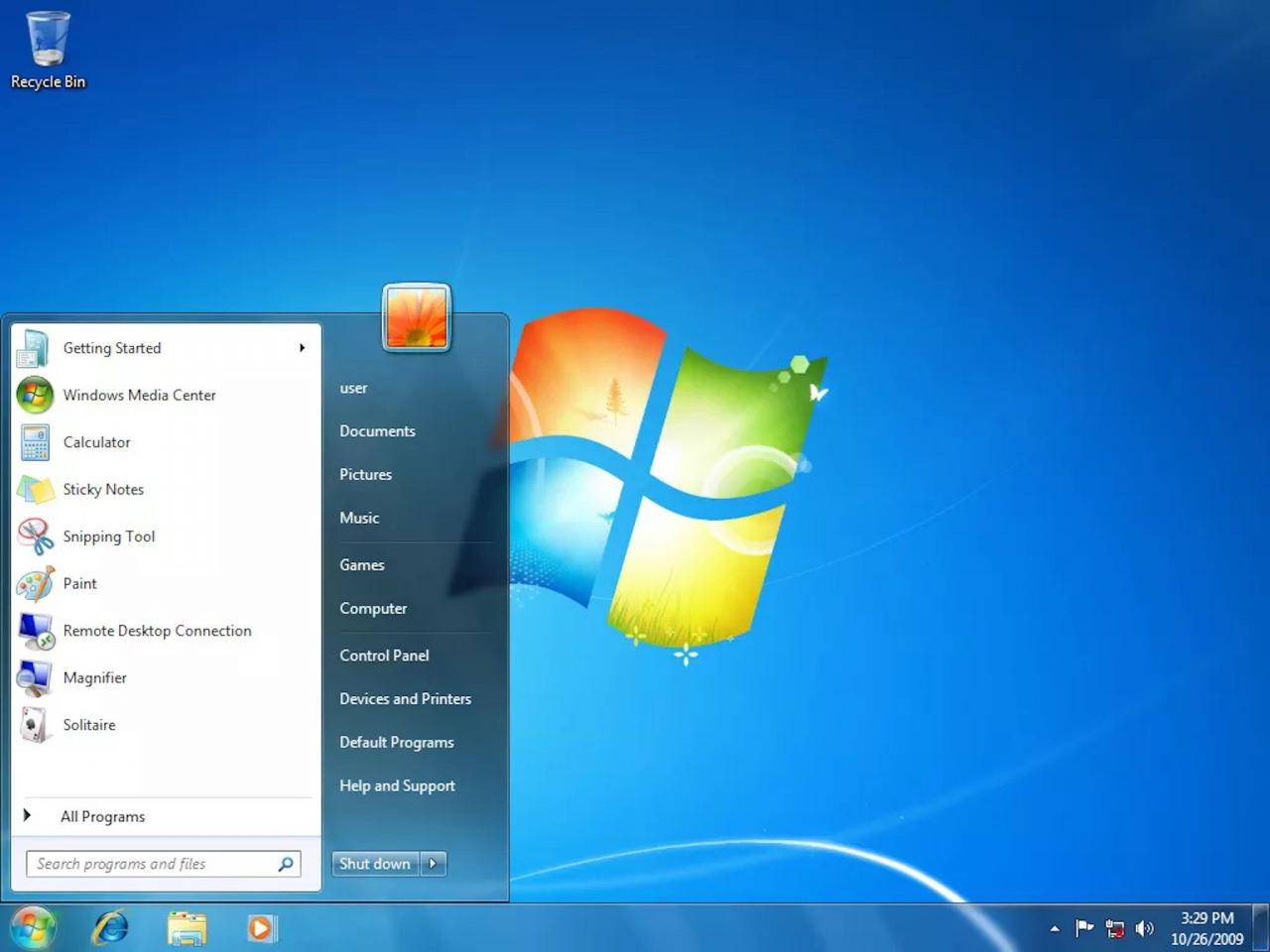 Windows 8 has dramatically changed the design after 3 years of the development of Microsoft. Things are now flattered, removing the Start Menu, and introducing a new Metro Style design. Windows 8 is said to be a step for Microsoft to approach the touch screen, but this sudden change has made users feel unsuitable, forcing Microsoft to rethink this move. 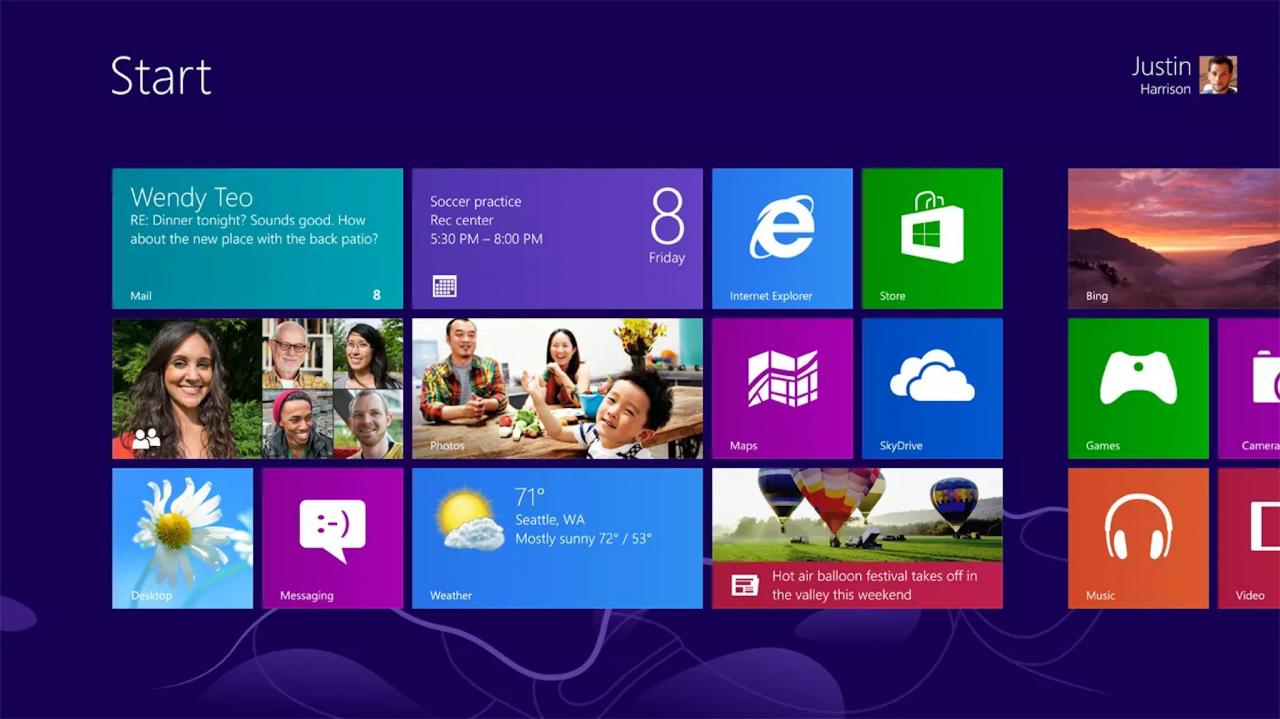 With Windows 8 being estranged, Microsoft was forced to bring a new version of Windows “familiar” more. The scenario with Windows 10 is quite similar to Windows 7 when it had to mess up the new cleanup that Windows 8 left behind. The Start Menu is back, and a bunch of new features like Cortana, Microsoft Edge, and Xbox One streaming is brought to this version. The interface is also very nice and modern. 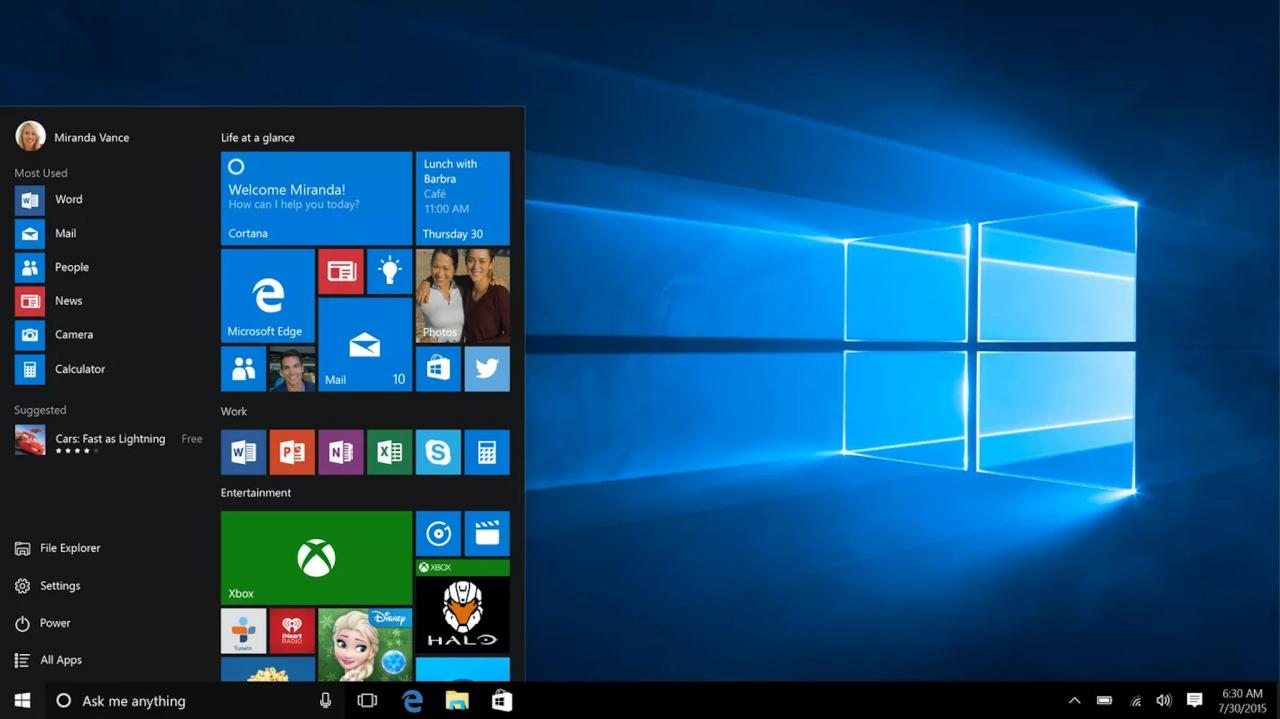 In the 5 years since its launch, Windows 10 has not had too many changes in the interface. Microsoft has gradually tweaked various parts in recent versions. In the near future, they will continue to find ways to merge Control Panel into Settings so that everything is unified and easier to use.