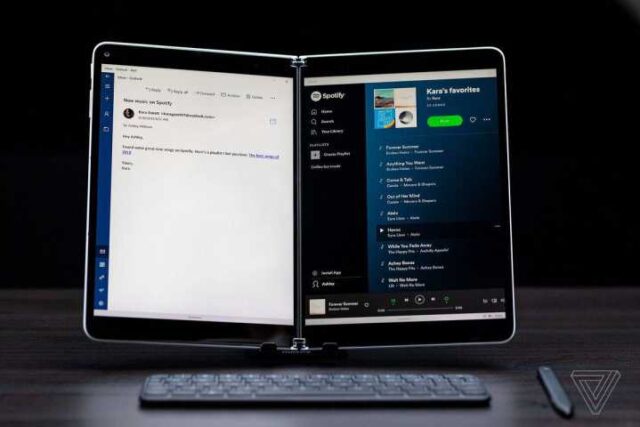 According to a report from Windows Central, Windows 10X operating system and third-party OEM equipment are hopeless to come out this year.

According to the original plan, the Windows 10X released last year was supposed to meet with consumers at the end of this year. But since the first extension was announced in May this year, Microsoft announced another extension a few days ago.

It is reported that the single-screen Windows 10X used in the enterprise and education fields will wait until the spring of 2021, and the version with dual-screen support may even wait until 2022.

What is Windows 10X and what is its meaning

Sitting in front of your computer and using Windows 10, you may be a little unfamiliar with Windows 10X. What is Microsoft doing?

This will start from last year. As usual, Microsoft held its own autumn conference during the National Day in October last year. In addition to updating the Surface Family Bucket and related accessories, it also brought out two new products, Surface Neo and Surface Duo.

These two new products are the main dual-screen concept, but the Surface Duo uses the Android system, which is like a product between a mobile phone and a tablet, and the Surface Neo is a dual-screen laptop, which is newly built by Microsoft. Windows 10X system.

What’s interesting is that the name Windows 10X also seems to have a certain pun. No need to say 10, and “X” in Roman numerals also represents 10, which means that Windows 10X is essentially two “10s”, which fit exactly. In view of its concept of dual screens, I don’t know which layer Microsoft was on when it was named. Anyway, I think I’m on the fifth layer.

Dual-screen devices are a topic that has been chewed up over and over again. From Android to Windwos, many mainstream manufacturers have tried to launch dual-screen devices, trying to use a larger display area in exchange for an improvement in experience. But none of these dual-screen devices has ever been successful, or even barely impressed.

The most successful dual-screen electronic devices in history are Nintendo’s NDS and 3DS. No other dual-screen products can touch them.

Can Windows 10X succeed? Let us first look at what Microsoft has done on Windows 10X. If you want to summarize a few key words of Windows 10X, I think it is: “mobile, touch, closed”.

Wndows 10X draws on the design of many mobile terminals, such as canceling the traditional start menu design and replacing it with a grid-style home screen, similar to a smart phone, but also a bit like the home page of Chrome. In short, the design of the large icon and the quick search bar are seamlessly connected with people’s mobile habits.

In addition, swiping gestures from the bottom up will bring up the Dock bar and multitasking interface, a simplified version of the explorer will be displayed when running UWP applications, and the unilateral screen will be automatically covered when the program is opened. These habits are undoubtedly for Designed for touch.

As for closure, Microsoft has imposed many restrictions on Windows 10X, such as restricting access to some system-level files and application data. Some applications that support minimizing to the system tray area, such as anti-virus software, etc., cannot run normally on Windows 10X due to system limitations. Even the drivers have become unified system takeovers, and users cannot install them manually.

In addition to supporting the running of UWP applications, Windows 10X can also run traditional win32 desktop applications in a virtual machine-like manner, but Microsoft may impose restrictions on Win 32 applications, such as limiting background running time and so on.

Compared with Windows 10, Windows 10X’s higher closedness improves the consistency of the experience, but it also sacrifices a certain degree of freedom and raises the barrier to enter the ecology.

Most of the derivative systems that Microsoft has made before have failed, why

If you are a “Win Boy” who has been following Microsoft for many years, you will find that, in fact, the only thing that Microsoft has been stably playing without making a big mistake in these years is the genuine desktop Windows operating system, or it may be that the old book is strong enough and the history is long enough. If you make a mistake, there is still time to fix it anyway. But the new Microsoft systems that want to open up another world seem to have failed without exception.

The closest thing to success seems to be the Windows Phone, a mobile system, which once combined with iOS and Android to form the “Royal Sanjia”. Although the position of the youngest in terms of market share is still relatively low, it is still in history. He left his name.

The luck of the other operating system is even worse. In 2012, Microsoft also launched an operating system called Windows RT for tablet computers. It uses a Modern UI built for touch. It does not have the familiar start menu and does not support X86-based applications. If you want to download applications, you can only Get it from Microsoft’s App Store.

This system is not even like Windows Phone that has been tried by many manufacturers, but almost directly declared dead. Except for Microsoft’s own Surface products, only Lenovo, Dell, Asus and other major PC manufacturers give Microsoft face, symbolic There is no follow-up after the launch of a product.

In addition to Windows Phone and Windows RT, the most recent failure should belong to Windows 10S. This system Microsoft is positioned in the education version, and similar to the original Windows RT, Windows 10S cannot run any applications outside the application store. There is no doubt that this product is repeating the same mistakes. No one wants to use a system that has been cut across the artery. Fortunately, Microsoft also gave users the option of paying to upgrade to the Home version (Microsoft: plan to pass!).

All in all, in short, we do not look at the enterprise version of this product, only the Windows version for individual consumers. Basically, Microsoft has been fighting repeatedly, and there is no Windows derivative system that really has a firm foothold. .

But maybe Microsoft’s happiness today is to be an excellent third-party developer on other people’s platforms, and it’s a great pleasure for its own signature software on iOS and Android platforms. But Microsoft, you better not forget how the Windows Phone version of the Youtube application was suppressed by Google.

As for why Microsoft has repeatedly failed, there are actually traces to follow.

How does Microsoft’s control over the ecosystem need to be improved?

Have you found it? In fact, Microsoft’s failed operating systems have a very significant common feature-relying on the app store.

Perhaps some have to do this, and some are intentional by Microsoft, but they all point to the same result, that is, there is no ecological soil.

A very simple question is why early Android quickly occupied the market due to its crude system functions and aesthetics. Because using Java as a development tool makes development and porting extremely easy, first let users have the use, and then think about the design language and efficiency.

This is even more difficult for the desktop environment, because mobile devices were still in the emerging stage, and this approach had the greatest effect. However, the software ecology of the desktop environment has been deeply entrenched. Even Apple’s ability to control the desktop environment is not as strong as that of the mobile terminal, and Microsoft’s construction of the application store can be described as slow as a snail. Not to mention productivity, even basic entertainment functions are not enough.

The same is true for operating systems such as Windows 10X. From the perspective of tablets, although the iPad’s own dedicated application ecosystem is far from mobile phones, it is still unique among tablets.

The Android tablet can benefit from the mobile version of the application, and it has a certain ecological foundation, and the more open features also have many magical modified tablet systems, and it can also force the application to be windowed.

The poor UWP apps in the Windows Store will become the biggest obstacle to Windows 10X. If Microsoft wants to make Windows 10X at least not dead, it must reach an agreement with giant-level companies as soon as possible, so that some of the most used applications in the world can appear in the form of adapting to Windows 10X, rather than purely using the win32 version. Application, this is only a temporary solution, not a permanent cure.

Looking at it now, the extension of Windows 10X is a good thing. Microsoft now has more time to think about and polish this system, and it may get a more complete experience by then.

The bad news for Microsoft is on Apple’s side. After the desktop environment has gradually shifted to ARM, it has accelerated the trend of unification. The iPad tablet may gain more and more ecological benefits in the past few years. This is for all Windows devices. All threats.

Only when hardware, operating system, and application programs can’t be lame, a new system can sprout and grow, and can Microsoft learn from it this time?

Why is Japan called Japan