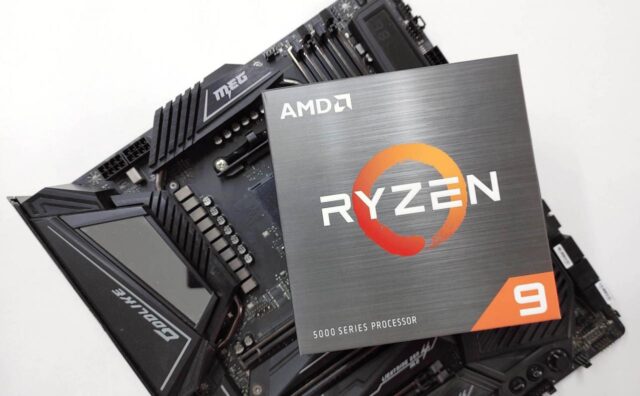 OUWA.org – Ryzen 9 5950X: 16 Cores. The Ryzen 5000 series (Vermeer) with Zen 3 architecture continues to make the competition from Intel weak. Although there is no change in the multiplier compared to the Ryzen 3000 series (Matisse) Zen 2, this time, the Zen 3 not only offers higher IPC performance, but the Ryzen 5000 series were able to easily hit the clock 5 GHz without OC.

Therefore, Ryzen 5000 series is now able to compete fairly on clock speed with Intel. The version I am experiencing is the Ryzen 9 5950X – this is also the flagship of the Ryzen 5000 series with 16 cores 32 threads, a price range of 800 USD, and of course, it is for the enthusiast segment.

Key differences between Zen 3 and Zen 2 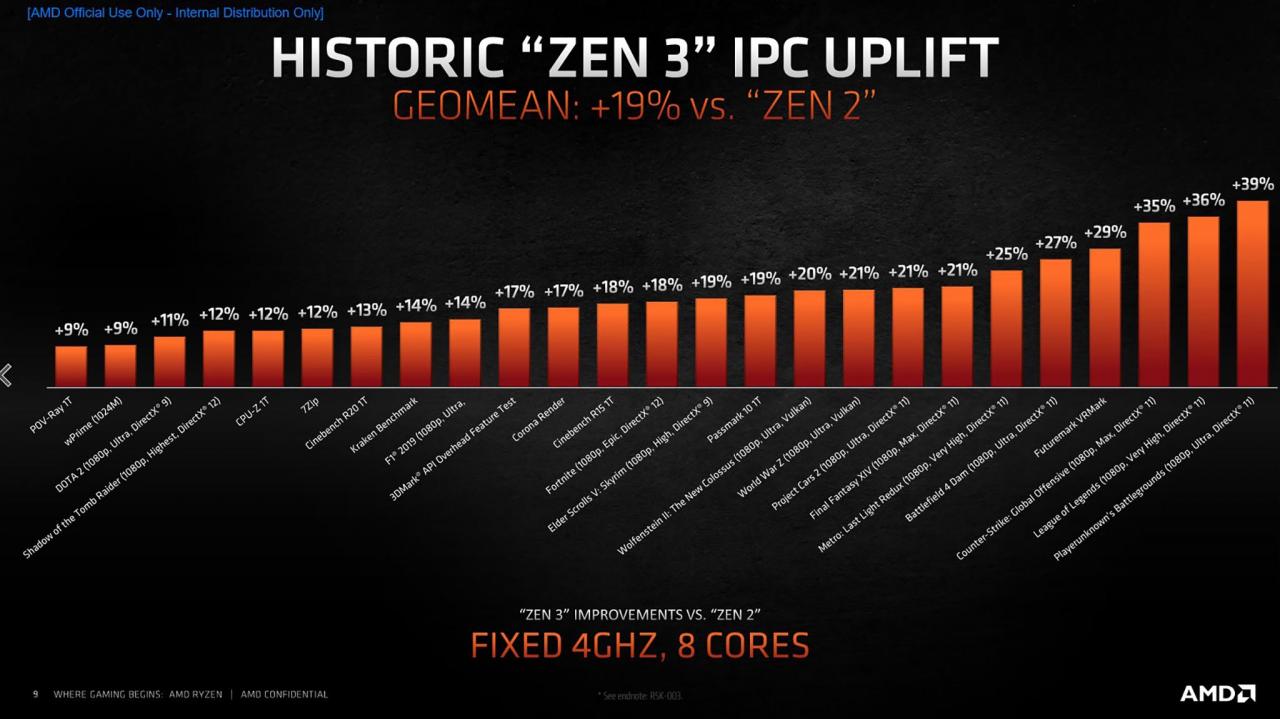 Even though Zen 3 still uses the same 7nm process as Zen 2, AMD has made important changes, most notably the CCX and CCD layout. With a chiplet design, AMD Ryzen processors have clusters of cores called CCD (Core Complex Die) inside containing cores called CCX. In previous Zen generations, AMD designed a 4-core CCD, and as such a 16-core processor would have 4 CCDs (eg Ryzen 9 3950X). The CCDs, the I / O base containing the IO microcontroller and the memory microcontroller… are connected by the Infinity Fabric bridge, and the more the CCD base the higher the latency. When the cores of one CCD base need to access the L3 buffer on another CCD base it must go through the Infinity Fabric bridge on the I / O base. 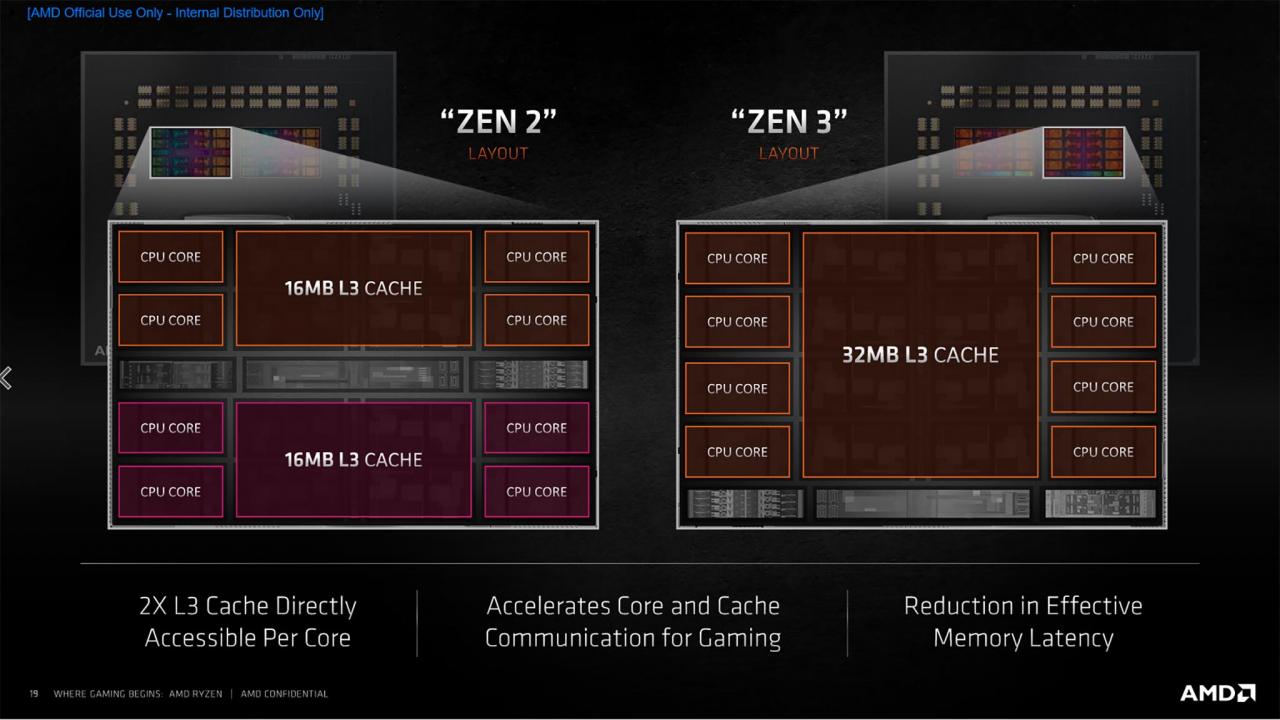 With Zen 3 AMD redesigned this layout with 8 cores in one CCD, significantly reducing latency between the cores and providing better multi-core performance. This design also optimizes the ability of the cores to access L3 buffers on a CCD. With the same 32 MB L3 buffer, as the previous design, the buffer is split in half so that each of the 4 cores can access 16 MB in a CCD. Now in reverse, 8 cores in the same CCD share the same L3 buffer and each core can access the 32 MB buffer directly. This is also a design factor that effectively reduces system memory access latency when the buffer is closer to the cores, thereby giving the advantage of low-latency memory applications like games. 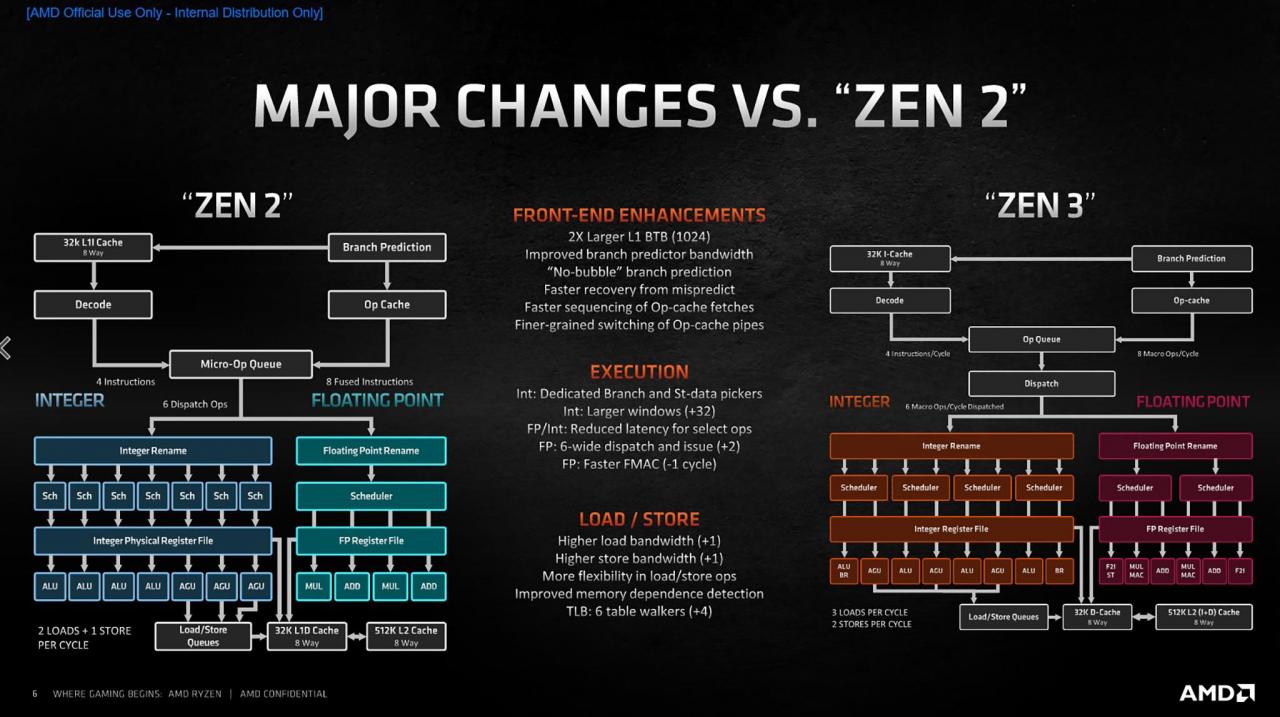 The improvements to the layout make Zen 3 include Front-End system enhancements, load / save system, larger branch preditor bandwidth, and speed to switch between buffers. micro-operation from the decoded instruction (op-cache or uop cache) and the instruction cache is also faster, the execution engine has been newly designed with multiple schedulers, expanded the bandwidth of binary processing branches, and That verb gives Zen 3 a 19% higher IPC than Zen 2. 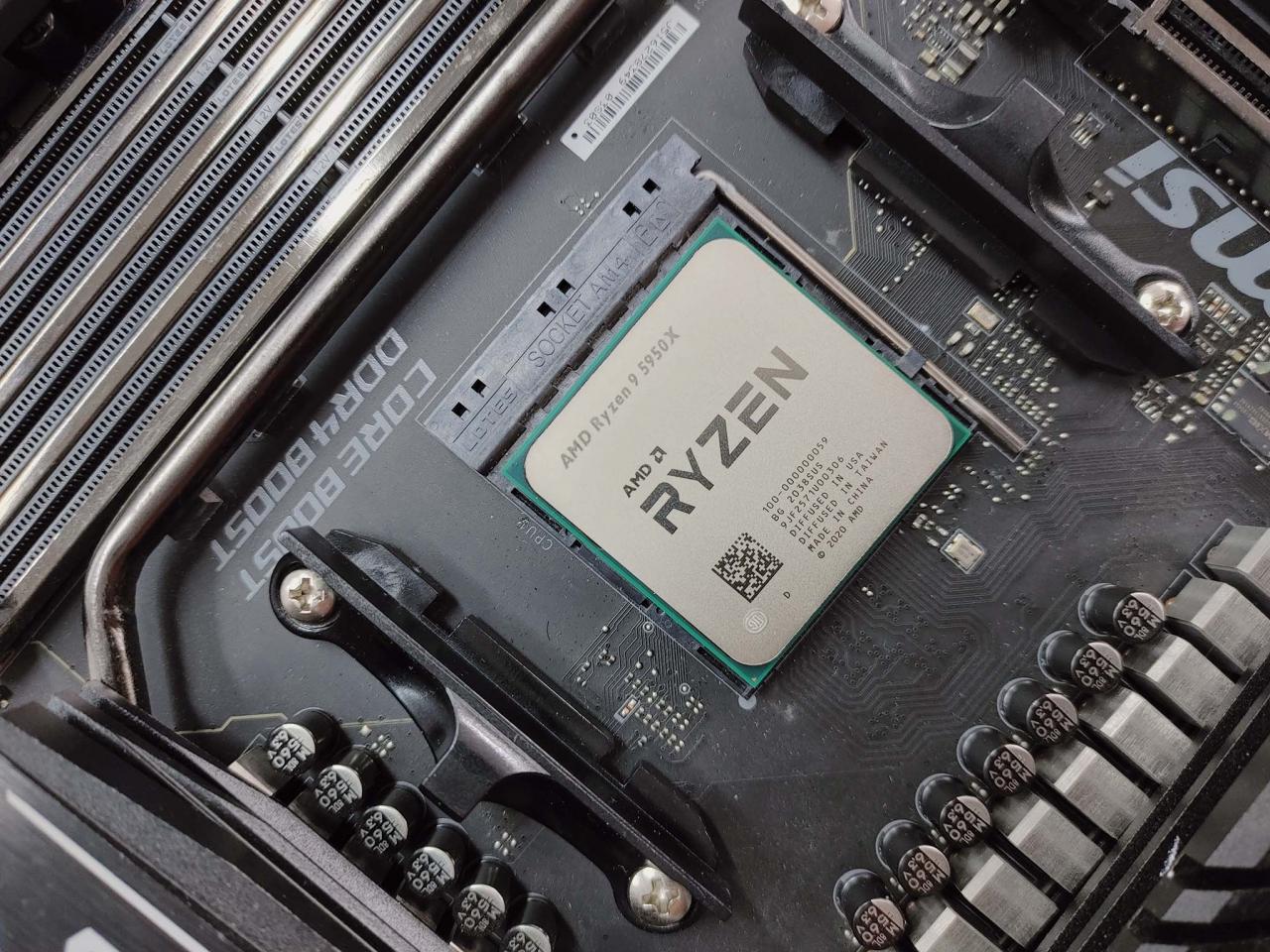 This is AMD’s most powerful processor in the current Ryzen 5000 series, it directly replaces the Ryzen 9 3950X with the same cores and threads. Zen 3 gives higher IPC and Ryzen 5950X’s clock is very high, 3.4GHz base clock and 4.9GHz Boost. Whereas the Ryzen 3950X has a base clock of 3.5 GHz but Boost is only 4.7 GHz. AMD’s processors have Precision Boost technology and with good enough heat dissipation, the maximum clock rate can be even higher. During the test we saw a 5 GHz clock speed in 2 cores while the TDP of the Ryzen 9 5950X was still 105 W, not higher than the Ryzen 9 3950X.

Ryzen 9 5950X is still alone because Intel has no competitor with 16 cores, only the Core i9-10980XE 18 with 36 threads but its price is significantly more expensive. 16 cores is too much for the game, but it will be a great solution for those who need a multi-core CPU to render or play games, stream, and record. 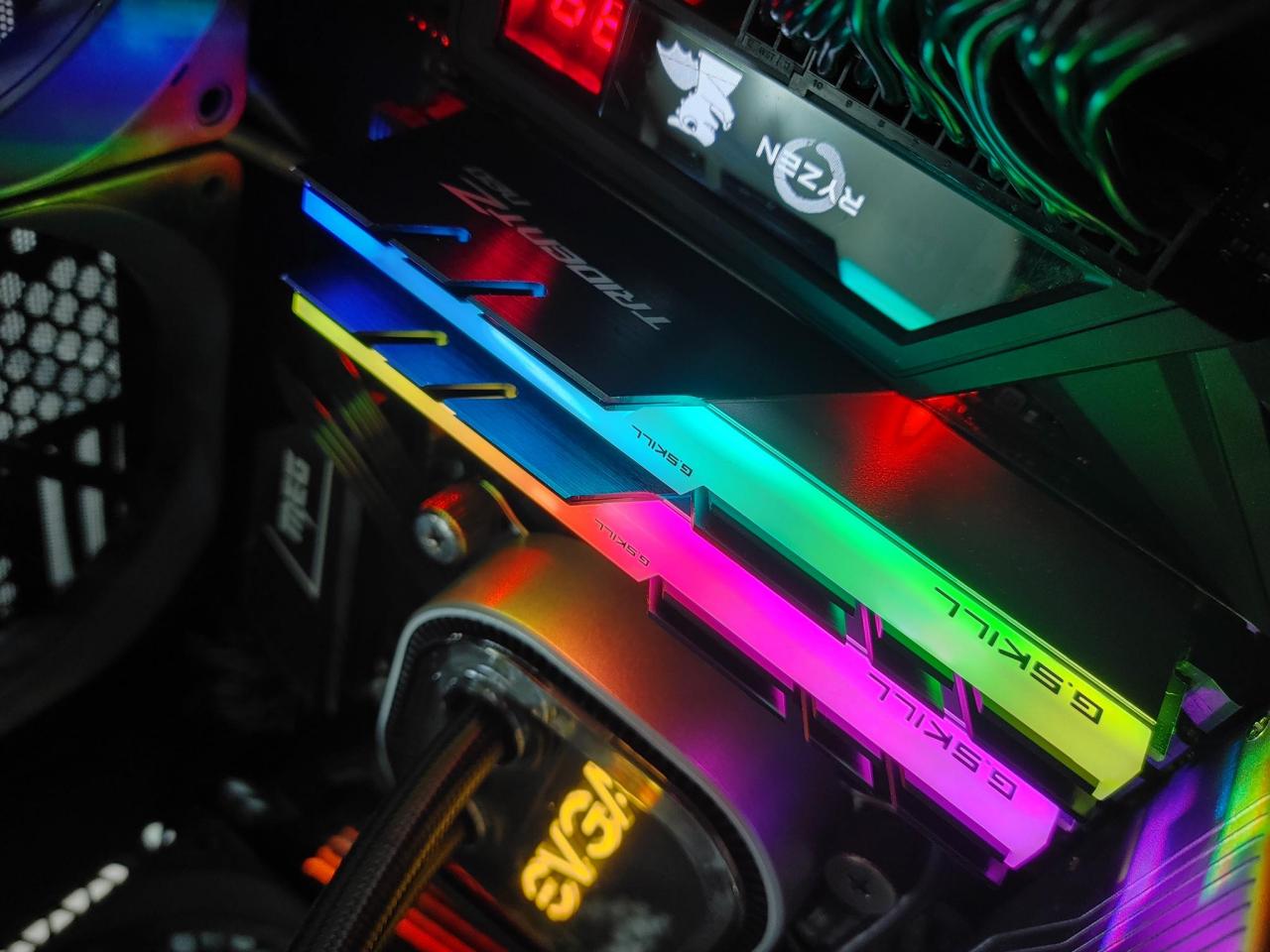 Ryzen is always sensitive to RAM and with this Ryzen 5000 series, high-clocked RAM kits like DDR4-3600 / 4000 or higher can be better compatible than Ryzen 3000 series. For the best performance, the clock of MEMCLK (memory pulse DRAM), UCLK (pulse of memory microcontroller), and FCLK (pulse of Infinity Fabric bridge) reach a 1:1:1 ratio. With the FCLK clock at 1800 MHz, I still cannot push to 2000 MHz, the transfer rate of DRAM is 3600 MT / s (clock 1800 MHz) is still the most ideal. I tested with G.Skill TridentZ Neo DDR4-3600 CL16 RAM kit – this is the RAM kit I usually use with AMD and also recommend you to use it with Ryzen. Also, you can look for DRAM 3600 MHz kit or try the OC kit of RAM you are using. 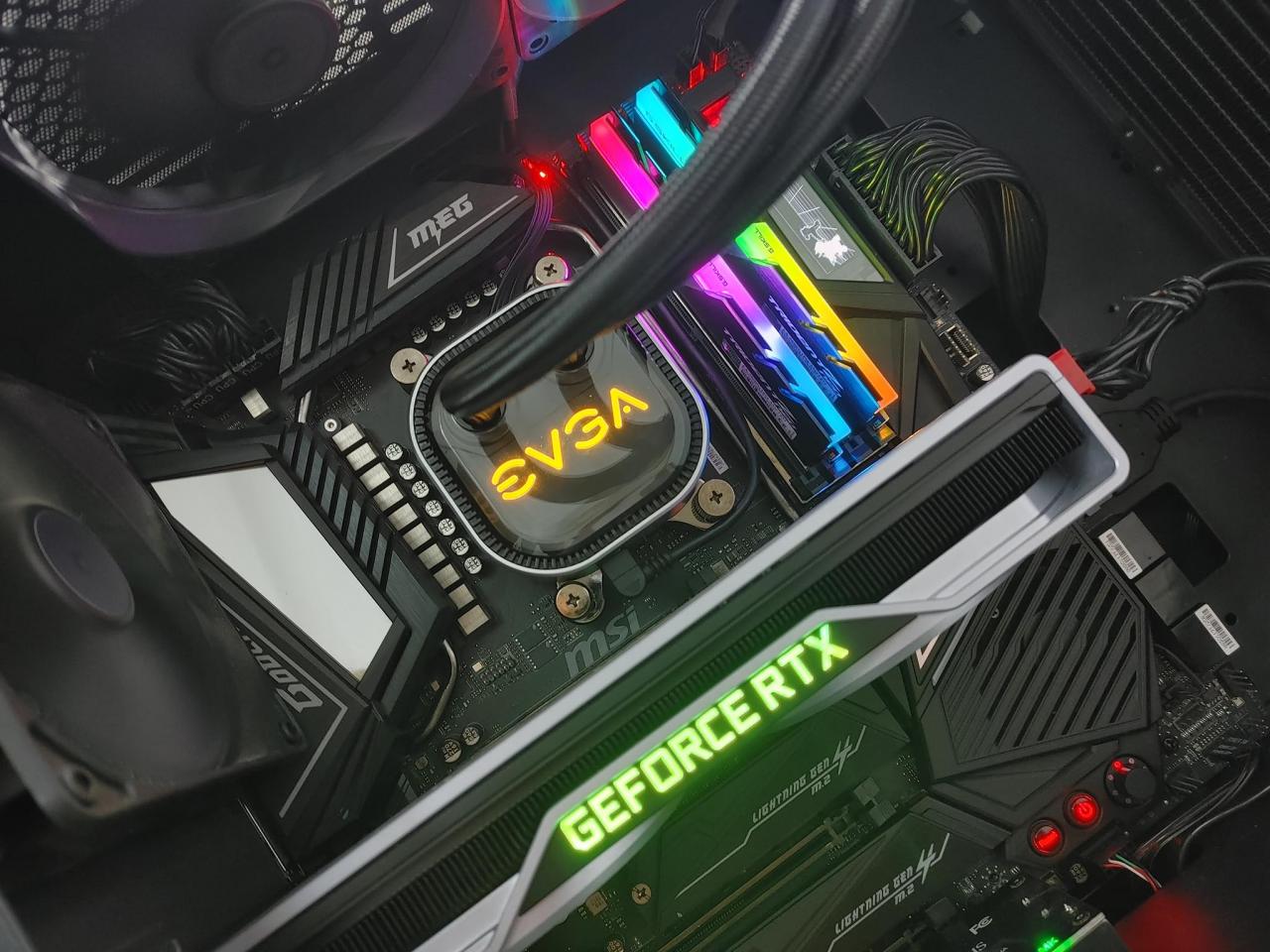 About the heatsink I used for Ryzen 9 5950X, this is EVGA CLC 360 – a top AIO heatsink. I bought this radiator in the US on the occasion of its discount and was extremely satisfied with it. This heatsink, though not beautiful in the RGB style, can help me easily OC the Ryzen 9 5950X, do not crash when stress tests, and CPU temperature when the OC is still at an acceptable level. The heatsink I think you might consider using with the Ryzen 9 5950X is the Corsair H150i PRO RGB 360 mm (this model uses the Asetek 6 pump similar to the EVGA CLC 360), EKWB EK-AIO 360 D- RGB (I have tested with Ryzen 9 3900XT and am using Core i9-10900K), Cougar Helor 360 (this cooler I used to pull Core i9-10980XE 18 core 4.5 GHz delicious).